A New Lens
First, Do No Harm
Slay

Faced with family trauma, self-doubt, and plenty of uncertainty, local business owner Natalie Hinckley has found a way to chart her own authentic course through video production, music, and love.

My wife is going into labor. Two weeks early. In a scramble, I’m doing my best to clear my schedule; packing up our hospital bags, postponing shoots, briefing forgiving clients, and covering shoots I’m scheduled to direct. I email every single professional contact that our planned open house is about to be postponed—my wife is going into early labor and our child is about to be born. I’m joined in the hospital by my mother, sister, and my wife’s family—all beaming with anticipation.

Rewind 10 years. I was four years out of college and just getting myself established. Upon graduating, I started my business on the side. It was 2007, some big jobs were heading my way, and I was ready to make the leap. No looking back. I quit my job, ready to produce video full time. It was challenging to navigate the world of self-employment, but I was making it work. My degrees in art and business helped me with my goals and while I always knew I would eventually run my own business, I hadn’t planned for it happening so quickly. But the timing was right.

My work filming bands lead to interesting jobs, like directing the Madison Area Music Awards, live streaming at SXSW, and producing a feature-length rockcumentary for Crustacean Records. It caught the attention of Madison’s local roller derby league and we became their in-house production team. This early work with derby would lead to hundreds of derby games to come, traveling nationwide to provide video for tournaments. Later, editing work for international retailer Lands’ End would kickstart my now well-established career as a director within the industry.

Thrilling events were happening in my personal life, too. I always wanted to be in a band, so I took up bass guitar, ready to explore the Madison music scene. Playing in musical projects would give me the experience and groundwork for my own project, a surf-punk band eventually known as Venus in Furs. It was also at this time (my mid-20s) that I left the boyfriends behind and started dating women.

Then 2009 turned out to be a terrible year. We unexpectedly lost my father and it devastated my family. My dad was the kind of guy that always had a project underway: Fixing a fence, changing the Jeep’s oil, planning our family vacation. He was a person constantly in motion, a trait I’ve inherited (that and the brilliant idea to keep an industrial-size bottle of Frank’s Hot Sauce in the fridge at all times. It goes with everything!). He helped me get my business started. Together, we calculated my first hourly rates, considered insurance options, and laid the bookkeeping groundwork for year-end taxes. I looked to him for advice and direction. My dad was the rock of our family, and now gone, we were left stunned and shaken.

I had developed a pretty steady relationship with my girlfriend by this time. The loss urged me to be more open and honest with my remaining family. I hoped we would know each other better moving forward. I felt that I could not wholeheartedly support the rest of my family without being open about myself.

It didn’t work out quite as smoothly as I had planned. In fact, the news was poorly received. Too much uncertainty for my family left little tolerance for unexpected revelations. As if things couldn’t get worse, my relationship with my girlfriend was crumbling. I felt I had nothing.

With all of the upheavals, day-to-day functioning became incredibly difficult. It was a deep challenge to move my business forward, or even find meaning in daily life. At a time when seemingly everything was coming together, things were ripping apart, and I found myself flailing. Although I realized my experience wasn’t unique (and that my family was suffering as well), just doing the bare minimum of following up on commitments felt, at times, nearly impossible.

Fearing further rejection, I avoided coming out to anyone else. Even when friends asked about my girlfriend I flat-out denied the relationship. The idea of being out professionally wasn’t even a consideration. My guards were down, I was emotionally bruised, and I simply could not weather yet another blow. Instead, I buried it.

My refuge was in playing music with the bands. We wrote songs, we partied, we put on crazy shows. It was a great escape, but it came with a cost. Late shows and practices found me with plenty of excuses to push my emotions aside. Staying out at bars late (even on weeknights), only made things worse. The music was good, but I wasn’t a rockstar. I was a person hiding from my problems.

Our new guitar player, Victoria, saw how badly I was hurting. She, along with a couple close friends, helped me make it through. She encouraged me to seek counseling to confront my father’s death, to improve the relationship with my family, and to be comfortable again in my own skin.

Though 2009 through 2012 seems like a void of time, when I look back I’m amazed to be reminded of what good things did come of it. Venus in Furs would release an album and tour the East Coast in 2012, and my relationship with that guitar player, Victoria, would blossom.

Victoria, aka ‘Elle Machette’ (her roller derby name), had been asked to join the band to play guitar, referred to us by fellow derby skater, Sour Kraut. From the start of the band, I felt this spark of excitement towards her. There was a comfort of a friend you’d known for years even though it was just a matter of months. As we got to know each other better, I’d bring her popsicles when she was sick. She came to events I was filming.

One evening, she said she was in the mood for sushi and asked me if I wanted to join her. We walked into a surprisingly crowded restaurant, which was odd for a Sunday night. Only after looking around and noticing couple-filled tables and menu items such as ‘The Love Boat’ did we finally realize it was Valentine’s Day! As we left the restaurant we bumped into a few friends. The smiles on their faces suggested they’d discovered our secret date. I remember blushing, though it wasn’t an official date. In fact, we were becoming an item.

Taking the next step

This time would mark a change in my business. I was re-energized and would move from a solo operation (supported by freelancers) to hiring my first full-time employee. I had moved out of the home office and into a thousand-square-foot incubator space. Business plan in hand, I was taking more mindful steps to expand and grow.

I think it’s actually much more challenging for me to be a woman in my industry than it is for me to be LGBTQ. Often, unless I am upfront about my marriage, etc, it’s not obvious. Straight people tend to assume I’m also straight. This summer I was listening to a story on the radio about the activist who had been in Iraq advocating women’s attendance of school. I thought how unfortunate it was that this is a still a real struggle for women in our modern times. It saddened me and made me feel fortunate that I was lucky enough to be born in a place where I am free to move about society, do as I will, and follow my career and dreams under my own terms.

Later, I was on a shoot and the talent walked onto set and proceeded to discuss details of the production with one of my teenage assistants, also a male. He assumed that he was the director until I introduced myself and the crew. Sexism, even subtle and unintended, is still very much our reality. As I may be casually or unintentionally overlooked in a physical setting, I can only imagine how often this happens when being considered for work against my male peers or over other production companies.

Despite these continuing challenges, it would be a shame to focus only on the negative. I can’t ignore the many opportunities brought before me as a result of hard work, or the women and men that have gone out of their way to help me advance my career. Being a woman and LGBTQ provides a perspective that many other directors simply do not have and is an advantage of its own. 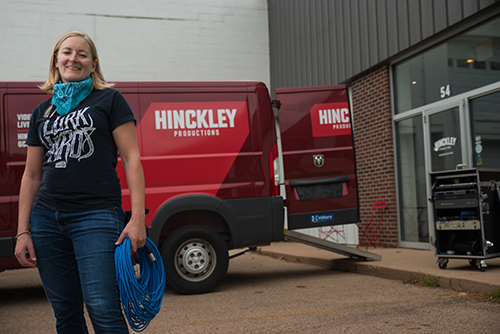 The perspective of liberation

As trying as my life’s experiences have sometimes been for me and my family, enduring life’s tragedies has helped me become a more patient, sympathetic person. It’s impossible to know anyone’s current situation, and I’ve learned that simple kindness goes a long way. On video shoots, I often hear comments about how calm I seem under stress, or how relaxed I am when production plans go awry. Though problems certainly do arise, it’s not worth stressing over things outside your control. My experiences have given me perspective and understanding, qualities that have helped me with not only my business, but also with my personal life. And, although I love and value my work deeply, at the end of the day, business takes a backseat to family and my own personal well-being.

Growing up, I always felt I was born in the wrong time—that the 1960s should have been my generation. How incredible to be alive and see so much social change, to witness a turning tide. And yet, here I am, witness to this very change in my own lifetime. I would never have expected to see LGBTQ people go from being softly spoken about, be the butt of jokes, or used as a way to slight someone’s masculinity/femininity, to seeing marriage equality, the end of DOMA, and an environment where I can freely refer to my partner as my wife. There is still much to be done. Yet, even while we are threatened in this political climate, I’m not sure anyone expected to see so much positive change so quickly.

I am a modern day activist simply by being myself. Really, we all are. Through this activism, we are empowered to be exactly who we should be: Ourselves. Most importantly, I’ve learned freedom. There was nothing more liberating than informing my colleagues that my wife just gave birth to our beautiful baby daughter.

Be who you are! 5th Annual ‘Jazz & Friends’ Community Readings