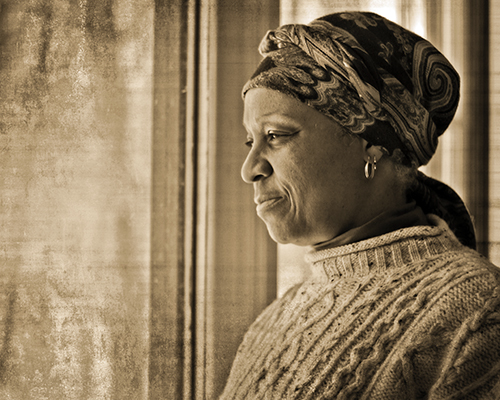 Imagine a woman alone in her studio. She turns on Haitian Vodou music and sits down before a daunting tub of earth as familiar to her as the land from which she comes and the dust to which she will return. She plunges strong fingers into the hard clay and kneads it until it turns into malleable dough.

The woman pays careful attention to the slippery mud she is molding between her fingers, and eventually it shows her what it wants to become. She listens to the magical sounds and powerful rhythms of her past. It is music her community danced to, finding their personal power and communal strength even as they endured brutality and oppression. It is sacred music passed down by her ancestors; an enduring gift that survived Christianity and patriarchy and slavery and dictators and hurricanes.

The artist is Babette Wainwright, and listening, watching, and channeling are part of her creative process. Slowly, from the clay, a figure emerges. Maybe it is a mother, a goddess, or a communion of spirits, but whatever the form, her work reclaims a pre-patriarchal veneration of femininity.

As a child growing up in Haiti, Babette was fiercely independent, articulate, and aware of the world around her. These traits were passed on by her activist grandfather and miraculously spared in her mother. Babette could not help but reject the Judeo-Christian god imposed upon her as a Catholic schoolgirl. Instead, she expressed her spirit in a way that validated who she was, and she did so by making art.

She was permitted unfettered access to her family’s “salon,” which in Haitian households was typically restricted to only the most special of guests. Self-sequestered in the parlor, Babette spent hours writing and creating images of hope for a good life. She learned that art-making could help her cope with the maddening frustration of growing up under the shadow of a brutal dictatorship. As a teen, Babette began to vocally oppose the oppressive regime of “Papa Doc” Duvalier, who murdered at least 30,000 Haitians during his despotic rule as “president for life.” Under Duvalier’s reign, dissent was forbidden and whole families could be destroyed by the expression of righteous pubescent rage.

Fearing the worst for her untamable 15-year-old daughter, but not wishing to stomp out her passion, Babette’s mother found a way to send her to the U.S. to complete her education. But the Brooklyn, New York, high school near her father’s apartment, where Babette landed in 1968, proved to be too foreign and hostile an environment; her father permitted her to drop out and move in with maternal aunts in upstate New York.

At that point in her life, she felt she was a burden to her aunts, who struggled to make ends meet in their own immigrant families. At 16, Babette met a young woman from Scotland who taught her how to get a job as a live-in domestic servant, which she did, but the personal cost was high. She felt very alone.

The following year, Babette and a couple of new Haitian immigrant friends walked into the high school near where they lived, registered themselves for classes, and started school again. She was put into 12th grade, finished the year, and graduated. From there, Babette went to beauty school, got a job as a hairstylist in Manhattan, and was able to meet many African American rising stars. She also met a wonderful young gay man who was trying to make it as a dancer. She ended up marrying him and having a child with him. It was 1972.

Babette went home to have her daughter. While in Haiti she worked in a hair salon, knowing that her hairstyling career would be a bridge to college. Eventually she came back to the U.S., got a bachelor’s degree and then a master’s in social work, and in 1984, she landed in Madison where she met her partner of 20 years, Kathy.

Throughout her life, Babette never lost faith in her intuitive process and never ceased making art, but she also craved a technical education, a resource that self-taught artists often miss. Babette’s parents had discouraged art school, preferring that Babette pursue a degree with a greater potential for financial independence.

When, as an accomplished adult, she was finally ready to fill this gap, she enrolled at UW-Madison and completed her MFA in 2000. It was there that her talents and passion for sculpture ripened.

Art has been a journey of survival and discovery for Babette Wainwright; when she digs into her clay she also digs deep into her emotions and unearths the treasures of her own expression: stories of political resistance and displacement, Catholicism and Vodou rituals, persistence and celebration.

For images of the artist’s work, visit portalwisconsin.org and search for Babette Wainwright. She is also a member of Woman Made Gallery in Chicago and is connected to Schaller + Jaquish Art Projects in New York.