A trip to their birthplace in Hawaii helped Marcelle Richards find a more whole self, and to at last feel at home in their surroundings

I am bi-racial: my mom is Korean, and my dad is white. Besides my mother, I grew up with only my dad’s paternal side of the family (my French grandmother and namesake was, like my mother, first generation and the only one from her family in the states). My mom didn’t teach us her language, and we grew up playing with cousins that most people didn’t believe were our cousins.

Even as a kid in California I remember being asked, “What are you?” I’d say: “I’m Hawaiian.” Now, this was around the time when those spandex bike shorts with the color stripe down the side were in style, along with scrunchy socks, before I really understood a need to define myself much at all. Rather, it was by necessity that people wanted to know…whatever it was about me.

I grew up listening to the backhanded racism of folks telling me how mixed race people are more attractive. I grew up wondering when I would have a “grown-up” nose like my blond haired, blue-eyed cousin Katie. What none of my friends knew was that I went to sleep at night with a hair clamp on my nose to try to narrow my “button nose” and there are a number of years of school pictures in which I look surprised because I am holding my eyes as wide open as I can.

I grew up learning to define myself to defend against the many ways others tried their damnedest to define me. It has taken years to come from a place of self-knowing rather than a place of internalized whitewashing.

I was born in Hawaii, Honolulu on the island of Oahu, so my young self jumped to the seemingly logical conclusion that I must be Hawaiian. I was wrong, but I think my young self also was onto something: Hawaii would feel like home. I found different language later, understanding that I am not Hawaiian by ethnicity. For many years, I adopted the word “hapa” for myself. It’s a word that originated in Hawaii (the rough translation is “half”) and it has since been used by people who are mixed race of Asian descent. Given the history of colonization, militarization, and the degradation of landscapes leading to well-known plantations, Koreans and Japanese people were brought over to work the land. People intermarried. Or there are folks like my parents, a white military guy with a Korean bride who married there, had me, and then kept migrating. Even though “hapa” offered solace in the succinctness with which I could describe myself, I have very recently abandoned the term for myself after engaging more deeply in conversations about how this phrase can perpetuate cultural appropriation when used by non-Native Hawaiians. Once again I had to grapple with how to describe myself and the best answer I have is to allow myself to embrace my multitudes, being everything that I am.

A return to Hawaii & self

We moved to California before my first birthday and I had never been back to Hawaii since, until I decided to finally go for my birthday last December. The trip coincided with the full “super” moon in parts of the world. In Hawaii, this moon fell on the 13th. For me it represented the theme of coming full circle.

I received a traditional Hawaiian tattoo, called kakau, a living sacred art, on my birthday. The tattoo, or uhi, symbolizes many things, some of which are just for me, but essentially it is a connection to my birthplace, and honoring the forward movement of my path. I had been in communication with the artist, Kahuna kā uhi Keli’iokalani Makua, for over a year before my arrival. His teacher, Su’a Sulu’ape Keone Nunes, received his title in Samoa by Su’a Sulu’ape Paolo, and Nunes is the person responsible for reviving Hawaiian kakau after it had been nearly wiped out due to U.S. colonialism and bans on cultural practices. Combining wisdom passed on by the memories of elders and learning from living Polynesian traditional tattoo traditions helped make it possible for Hawaiian kakau to survive, and now thrive. Makua is the only person to hold the elevated “expert” title of Kahuna kā uhi, which he received shortly after my departure. 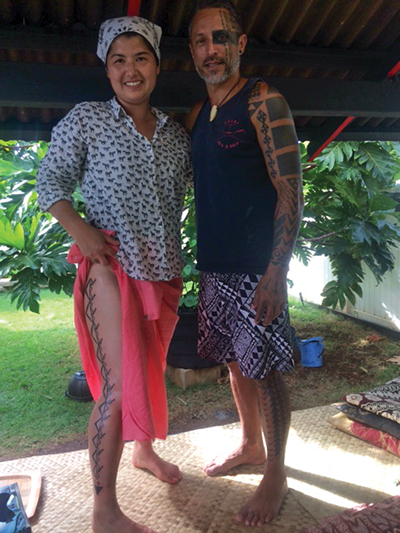 It was a healing in itself to have the honor to receive kakau, but really, it was also everything that came before I stepped onto the platform. I credit the blessing of crossing paths with Makua, and also witnessing Nunes at work, with the opening of a different door within myself, including a connection to my ancestors, my truth. Before receiving the tattoo, I participated in a traditional Hawaiian water cleansing in the ocean called kapu kai. You go in naked. It was one of the most beautiful experiences of my life. I was very present to the healing of all the shame I had carried with me around my race, and the projected shame and rejection that belong to other people that I had internalized about my fluid sexuality and gender.

Being someone who is chameleon-like, and authentically so, I am aware of the ripples I create when I float through the world, and why I feel resistance or tension. Sometimes it is my ethnicity (I find that what is even more upsetting to people than knowing what you “are” is not knowing what you “are”), or my gender presentation (sometimes so varied that people who have met me before don’t recognize me on a second meeting), or my visible queerness or some intersection of all of the above.

What I experienced in Hawaii felt like freedom. To be surrounded by people who look like me was profound for the reason it has not ever happened anywhere else, even when returning to countries of origin tied to my blood. I became keenly aware of how much energy it takes sometimes just to be. In Hawaii, I felt reborn in many ways, but one of them was in experiencing what it feels like to be embraced on a whole different level. And what was interesting is that knowing I was in a place where a third gender has historically been honored and recognized also let me relax in other ways with my identity. I became one with my surroundings, which is an ecstatic way to fall in love.

Tags:
Hawaii interracial Kahuna kā uhi Keli’iokalani Makua kakau Marcelle Richards non-binary queer
permalink https://ourlivesmadison.com/article/becoming-one/ A trip to their birthplace in Hawaii helped Marcelle Richards find a more whole self, and to at last feel at home in their surroundings Life in the Middle Publishing, LLC 2017