It’s all in the family, as Vivienne Andersen profiles the new Café Social and its owners Omar Lopez and Doug Swenson, who strive to bring Madison a truly sublime cup of joe.

How far would you go for a good cup of coffee? Some folks will answer that question by rehydrating crystals in the microwave and being satisfied. Others will insist on only locally roasted, organically grown, fair trade, cruelty-free, whole beans from their preferred local coffee shop, finely ground, tamped, and carefully brewed only with cold reverse-osmosis water. Most of us fall somewhere in between. For Omar Lopez, co-owner of Café Social, one of Madison’s newest coffee shops, that sort of work and dedication was still not providing a satisfactory cup of joe.

Omar, who was born and raised in Colombia, came to Madison in 1999 to study English. He quickly fell in love with the city, its culture, its people—but not its coffee. “What people are drinking here, this is crazy,” says Omar. Despite the coffee situation, though, Omar decided to stay in Madison and earned an MBA from Edgewood College in 2008.

Seeing an unmet need in the market, and having connections to coffee growers back home in Colombia (Omar’s sister owns the coffee plantation that Omar sources his beans from), Omar decided to start importing coffee himself. He began selling the coffee to local grocery stores, but with no brand awareness, he initially suffered lackluster sales. Selling coffee at farmers’ markets turned out to be the ideal way to introduce the Madison community to what truly yummy coffee Café Social was providing.

Part of Omar’s decision to stay in Madison was informed by a chance encounter with Doug Swenson (Omar’s partner of 12 years and the other co-owner of Café Social). The two sat at adjoining booths at Laredo’s Mexican restaurant one evening in late 2004. Doug admits that he had “worked it out so we could be at the counter paying our bills at the same time.” Coy about their relationship details, Doug did let slip that only two months elapsed between that meeting, and when he rented a U-Haul truck and moved in with Omar.

With Doug’s prior experience working in coffee shops, and the coffee bean business going strong, expanding Café Social into a brick and mortar location was the next logical step. In August of 2016, the stars aligned, and the perfect opportunity presented itself in the first floor of the new Uncommon building at the corner of Bedford and Mifflin Streets, and the guys jumped at it. “The first month was hard,” Doug said, but the café has since been a rousing success. The pair is excited about opening a second shop in Champaign, Illinois.

Café Social, besides slinging the most delicious cup of mud in town, also features food options from an impressive list of local suppliers providing some of their signature items. Fraboni’s pizza, empanadas from La Taguara, tamales from El Poblano, the Paoli Bread and Brat House is a non-exclusive list.

“Everything is local, hand made, nothing comes off the truck from Sysco,” Omar says. The space itself is sleek and modern, with high ceilings and lots of windows.

Many folks in Madison prefer to support locally sourced goods whenever possible, and buy fairly traded coffee from woman-owned farms, out of a sense of social responsibility (which is important to Omar and Doug, too). For Omar, it is all just a part of what it takes to get a truly good cup of coffee. 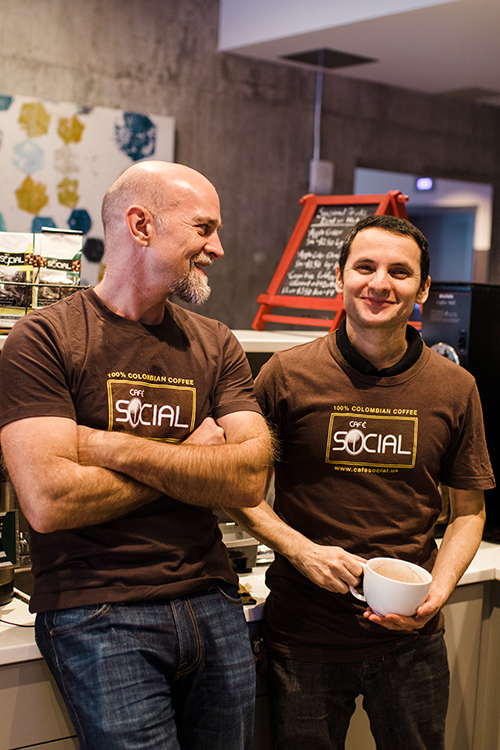 Ayurveda in the Garden