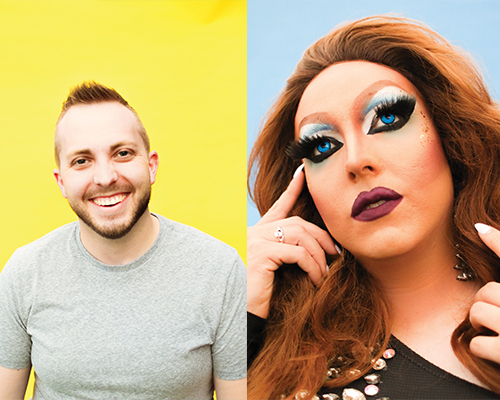 Tell us a little about your drag persona.

My drag persona is Bianca Lynn Breeze, but she wasn’t always that. When I first started doing drag, she was just Bianca Lynn. Bianca was a name that was given to me by a fellow performer and Lynn was my mom’s middle name.

Bianca was a peppy ball of energy when she first started and no one could stand in her way. She quickly learned that drag took time, energy, growing, and learning to become the queen she is today. More experienced entertainers would often find me staring at them in the mirror while attempting to “copy” what they were doing. I was not very successful with the “copying” in the beginning but eventually listened to what other entertainers had to say, learned the basics, and eventually started to really understand what drag is. Bianca is a fun, sweet queen who also like to do comedy, musical theater, and top 40 pop songs.

When did you first get into drag & what inspired you to do it?

Drag for me started out as a dare. I was the president of The Alliance (an LGBTQ organization) at U.W.-Platteville where I went to college. We held a large conference and drag show every year with more than 400 student from all over the area. I had two good girl friends help me “get in drag” for the end of the show as a surprise while we performed “You Can’t Stop the Beat” from Hairspray.

I then moved to Madison in 2012. I would go to Plan B to watch RuPaul’s Drag Race. A local drag queen hosted, and one night after indulging in a few beverages she said I had great assets for doing drag (aka, I had a big butt). So I said I’d give it a try, and the rest is history!

What do you love about drag that keeps you coming back? What role does it play in your life, in building community?

When I was in high school and college, I always wanted to be on the stage. I wanted to be in plays and musicals but never could work up the courage to do so. When I learned what drag was I felt like it would be the perfect outlet for me to play a character and lip sync to my favorite songs. Sure, I have a “great shower voice,” but it’s not good enough for live vocals.

When I put on my face, the hair, the flashy costumes, the heels, and the lights come on, it’s a whole other world. The feeling you get from all eyes on you and watching the audience smile, dance, and sing along with you is just amazing. The energy I get from performing keeps me coming back for more. It makes me push boundaries and challenge myself to do better each and every time. Drag isn’t just about performing, though. It goes beyond that. I have often donated time and money for local organizations, including OutReach, Willma’s Fund, Courage MKE, ARCW, St Jude’s Children’s Hospital, and many more. It’s about the community coming together to raise money for causes and organizations we believe in.

Who are some other performers that you look up to/admire and why?

One thing that none of them have done is taught me my painting (makeup) technique. They have influenced certain things, but I’m a self-taught drag queen by trial and error!

What are your thoughts on Madison’s drag scene?

Madison’s Drag scene is like no other. I’ve traveled and performed throughout the Midwest. There is definitely unique drag out there but Madison’s community has so many different styles. Drag isn’t just a male transforming into a female. There are bearded queens, Femme queens, bio queens, comedy queens, pageant queens, male entertainers, kings, and the list goes on. Madison has such a variety of drag and that’s what I love about being here.

If you were literally lip syncing for your life, what song would you choose and how would you dress for it?

Something by Meghan Trainor. That’s my girl! Whenever she comes on at the club, everyone always says, “Where’s Bianca?” Oftentimes I get Snapchats from friends all over lip syncing to Meghan Trainor!