Am I Welcome Here?
Mission Driven
The Power of Vulnerability
Breaking Binaries
Well Versed
All Together Now
Friendship is a Verb
Violence Hits Home
Unapologetic Craft
Family on Wheels
I Am UndocuQueer

In roller derby, Eddie “Rufhouse Wainwright” Lupella finally discovered a sport that not only welcomed queer people, but provided a needed team environment that ended up feeling more like family.

I grew up in central Minnesota—not the best environment for an outspoken kid who couldn’t contain his queerness to save his life. I never said it out loud, and it took me a long time to accept it myself. All of which was based on fear.

I have an identical twin, which might’ve affected a lot of people’s response to who I was as a child. “That one seems normal, but what’s up with that one?”

I lived the stereotypical “boy” life; played tee-ball and Little League, but preferred to pick the daisies. I was made fun of on a pretty constant basis, so even when I had interest in playing, I didn’t feel encouraged to do so. I loved playing soccer when I was little, but the small area I came from didn’t offer it.

The closest I got to sports in junior high and high school were five years of cross-country running. I could never see a place for myself in team sports, and I liked that I could do something athletic that only focused on me. I started taking dance lessons later in high school, which was a much friendlier environment, though in Minnesota I still faced a lot of questioning and assumptions being in dance. “Oh, you dance? I once knew this guy who danced so he could get all the girls!” Can’t say I was a fan of gendering activities and, looking back, it seemed like most people were trying to excuse or block out my potential queerness.

I continued dancing through college. I liked dancing, especially tap dancing, but it never fully clicked for me. Eventually I’d figure out it was because no one was smashing into each other (on purpose) when they were tap dancing. My other activities in college and through school were always arts related, which I still participate in when I can.

At the end of college, I had a friend who joined a women’s roller derby league in Stevens Point (shout-out to Midstate Sisters of Skate and Poundstooth). I had heard of roller derby, and I loved the idea of what it seemed to represent. Still, I’d never watched it, or even played it! I watched what the sport was doing for her. Whether she noticed it or not, her confidence went up. She got so excited talking about it. It seemed like there was something there.

Something about a woman-centric sport really appealed to me. In other sports, how often do you hear the default sport name used to refer to a league of predominantly women? There’s always the qualifier: “Women’s Basketball,” and so on.

I always felt safer in women’s spaces than male-dominated ones. Years of being berated for just being me and not being “man enough” or fitting whatever mold I was expected to fit made me fearful, but really when it came down to it, I didn’t want to be a part of those spaces anyway.

I moved to Milwaukee after college and was trying to find my place. I wanted a break from arts (especially after studying them) and had always wanted to try team sports. There were inter-leagues in college, but I never had time to do any of them. Seeing Poundstooth’s response to it made me curious, and with a Google search I found there was actually a men’s roller derby league in Milwaukee. At the time, it was called the Milwaukee Blitzdkrieg, but we’ve evolved into Wisconsin Men’s Roller Derby since combining with the amazing Madison men’s derby team, Mad Men. They had open practices and encouraged attending one to see if it was something you wanted to try, and I thought, “What the hell? Why not?”

I think I had it in my mind it was something I wanted to do. The first practice I went to was a little bit to see how it was played, but it was really to feel out if I could feel safe in this space. It was a group of men, but the coach was a woman. When everyone introduced themselves to me, I saw the same lights in everyone’s eyes as Poundstooth when she joined her league, and saw so many different kinds of people there skating, I knew I would try. There was one individual skating who flamboyantly introduced himself and I realized, “Wow, no one here cares who you are.” 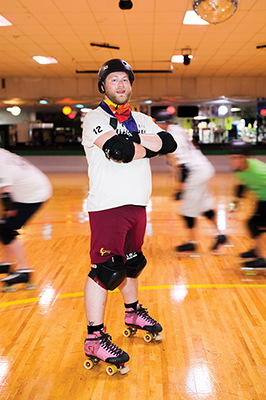 I’m now going into my seventh season of derby. There are a few other queer-identified men that are part of my league now, though I started as the only one. I stuck around because, for the first time, I was playing a team sport. I saw the value and excitement of being a part of something bigger than me—my team, my family.

I also saw men and women, those in between, and everyone working and playing together all for the love of getting smashed into on quad skates. I’ll never forget getting laid out on my ass by Stank Girl when we scrimmaged the Dairyland Dolls several seasons ago, and I’m 6’2″ and 250 pounds. Size, age, gender; nothing matters. Roller derby leveled the playing field, but moreso, I think it showed how ridiculous preconceived notions of gender or abilities—or anything else—are.

Underneath it all, I felt inspired knowing that I was a part of something woman-led. I’ve seen some backlash against men’s derby in my time, which I understand. Men’s sports are dominant, but the reason I joined derby wasn’t to try to take something from women—it was to learn from them.

I’m a lot more confident in who I am now, both through growing up, and through roller derby. My attraction and gender identity doesn’t define what boxes I have to fit into. Just because my size 13-wide quad skates are bright pink doesn’t mean I can’t knock your ass down. Come at me, bro.