Dalton Ray took the bold step of coming out as gay to his high school football team, but found himself back in the closet when he went off to college. It was the unexpected support he got from many of his old teammates, friends, and family—even in the often hyper-competitive and hyper-heterosexual culture of men's sports—plus the 'It Gets Better' movement, that finally inspired Ray to take the final plunge to come out fully and finally.

When I was two years old my family moved from Illinois to a small town in Wisconsin. It was a conservative town and tradition was held to a high standard; going against that standard was definitely looked down upon. Growing up I was always pretty close to my family, which consisted of my mom, dad, and two older brothers. I was very much a momma’s boy growing up because she worked at the elementary school I went to. We were an average family for the most part, always a lot of love around the house. My parents both worked a lot but we always found ways to spend time together whether it was going to my brothers’ sporting events or church on Sunday.

I can’t remember the exact moment, but around sixth or seventh grade I started to recognize some differences between my friends and myself. One of the main ones being I had zero desire to kiss a girl and when I finally did it was an extremely uncomfortable situation; not just because we were awkward teenagers but it just felt so wrong. I started having feelings for guys that I was “supposed” to be having for girls. Being so young, though, I told myself it was just a phase.

Middle school was also the age when I started competing in sports through school. I played football, basketball, and ran track. If there was one place I felt the most confident it would be when I was at practice or competing. I loved everything about it. On the flip side, if there was one place I felt uncomfortable it would be the locker room. A lot of the time I would wear my compression shorts to school so that I wouldn’t have to change around the guys.

Middle school had some challenges but it was nowhere near as difficult for me as high school. Middle schoolers can be gross but high schoolers are a totally different ball game. Some would go out of their way to make me not feel welcome. To make things worse those subtle feelings I had about other boys became everyday thoughts. By my freshman year I knew it wasn’t just some phase—these were real feelings.

To make things even worse, I started hearing my peers, some of whom were my best friends, use terms like “faggot,” “queer,” and “gay.” That’s so gay was possibly the most used phrase I heard and it was always used in a very derogatory way. When something was stupid or something was wrong it wasn’t called that, it was “that’s so gay.” Everything someone disagreed with was “so gay.” It was so negative. After hearing that day in and day out, I began to feel that way—I felt like there was something seriously wrong with me and I began to have a very negative outlook on life.

It was difficult to look in the mirror because I was so ashamed of myself. You know that saying, “Sticks and stones may break my bones but words will never hurt me?” I couldn’t disagree more. There were some days I’d rather get hit with a two-by-four than hear the crude comments some people made.

Remember how I said I always felt uncomfortable in locker rooms? That carried over to high school, too. And all those crude words and comments were carried from the hallways into the locker room. 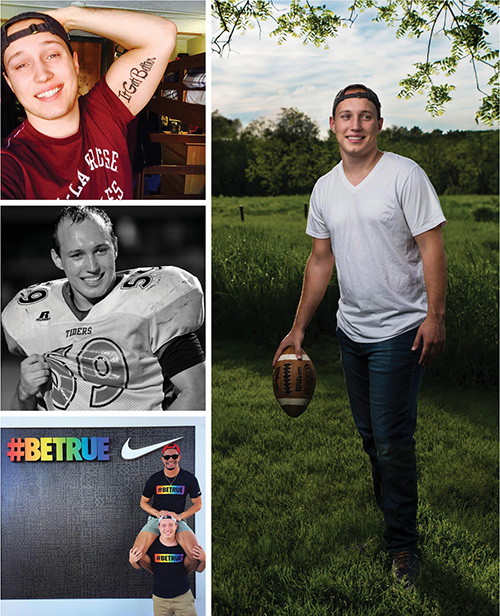 The closet on the field

At this point in my life football was the most important thing. Football to me wasn’t just some sport; those summer practices when it was hotter than hell pushed me past my limits and made me realize how strong I could be. Those other guys I shared the field with weren’t just teammates but brothers, too. To me there was no greater feeling then laying it all out on the field. Football was my passion.

I had always pushed myself hard because I felt as if I had to compensate for being gay. This wasn’t just physically draining, but it took a mental and emotional toll as well. Physical pain was always much easier for me to deal with compared to the emotional pain. I was always so worried about making mistakes and letting down my teammates that it held me back as a competitor. A lot of the time after a bad game I would tell myself that I performed so badly because I wasn’t man enough, and I wasn’t man enough because I was gay. Years of holding back so many feelings and emotions finally started physically manifesting themselves in a variety of self-destructive behaviors; my family and friends were starting to notice, too. Something had to change.

Halfway through my junior year I finally came out to my first friend and it went so well that it gave me the confidence to tell more people. Fast-forward to summer: It was just like every other summer before; I spent most of the days working out and getting ready for the big season. It was going to be my senior year, my last shot to do something amazing. I knew though that if I wanted to have the season I had always dreamed about that I would have to be myself. No more hiding.

A lot of guys on the football team were also my best friends, which made me even more nervous about sharing this with them. I wanted to tell them one-on-one because I had a different relationship with each of them. One of the most important guys I had to tell was the quarterback of the team, who also just so happened to be my best friend, Brooks. I remember it vividly. We were having a causal conversation about the upcoming season. It was our senior year so we were extremely pumped. After a pause in the conversation I decided there was no time like the present and came out to him.

“No way,” he said. “Dalton, I’m so happy you told me. Nothing changes anything, dude. How long have you known?”

We talked about it on and off for the months following and Brooks became one of my strongest supporters. To this day he still is. After telling Brooks, a wave of confidence came over me and I decided to keep telling guys on my teams. Each person had a similar response to me coming out: Always shocked but none-the-less 100% supportive.

Another specific moment I recall clearly is I had just gotten out of the locker room and was sitting on the staircase waiting for practice to start. As usual, I was stressing out about something. My buddy Chase sat down and we started talking about linebacker stuff and how great the upcoming season was going to be. Eventually Chase asked me what had been up with me lately. He, like so many, had noticed the stress.

In that moment I told myself just to go for it and I explained it all to him. The shocked look on his face was priceless. Just like Brooks, he reassured me that nothing would change and that he’d always be there for me. That season Chase and I played side by side as middle linebackers and ended up both getting all-conference awards for the position.

The truth will set you free

In many ways coming out made me a much better athlete, since being honest with everyone around me and with myself allowed me to become much more confident. On the field I was more relaxed and that, in turn, allowed me to do a better job. I attribute a large part of my success to coming out.

That football season, my senior year, was the season we always dreamed about. We went undefeated in conference play and made it to the second round of the playoffs, both huge accomplishments that our town hadn’t seen in a very long time. As I said before, I was an all-conference middle linebacker, something I was very proud of and still am.

That senior year flew by. Track season also went great—I was one of the captains and the events I ran were the 110 high and 300 intermediate hurdles. That year I was also proud of being voted the president of my class. My newfound confidence carried over to my leadership skills.

One saying that has guided me through all of this has been “It Gets Better.” It’s hard to realize that when you’re not out, and you’re hearing gay slurs every day. I felt suffocated, but as I opened up my true self to people I learned the power and truth of those three words. It’s meant so much to me that I had it tattooed on my arm.

Currently I am going to school in Madison and leaning towards a career in the nursing. I have a passion for traveling so ideally I’d love to become a traveling nurse. But what’s next in regards to the LGBT community? I’m currently getting involved with LGBT panels on and off campus. I’m also starting to get involved with some amazing LGBT sports organizations which I’m extremely excited about. Just recently I was invited to go to the Nike LGBT Sports Summit in Portland, Oregon this summer. Coming out has truly changed my life for the better.

It’s getting better every day. 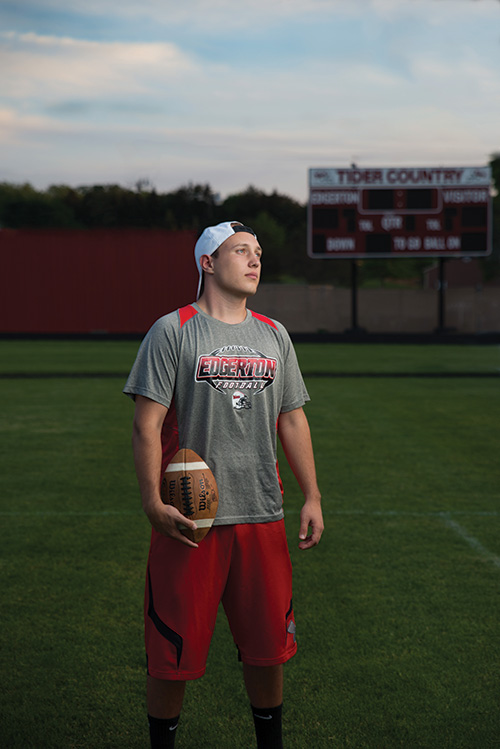 Tags:
Dalton Ray Edgerton Football It Gets Better UW LaCrosse
permalink https://ourlivesmadison.com/article/glory-days/ Dalton Ray took the bold step of coming out as gay to his high school football team, but found himself back in the closet when he went off to college. It was the unexpected support he got from many of his old teammates, friends, and family—even in the often hyper-competitive and hyper-heterosexual culture of men's sports—plus the 'It Gets Better' movement, that finally inspired Ray to take the final plunge to come out fully and finally. Life in the Middle Publishing, LLC 2016