Home Values and The Habitat ReStore 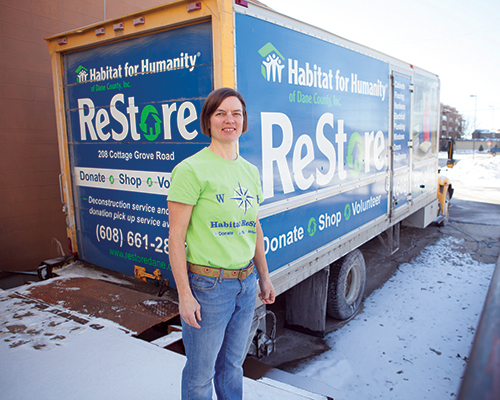 If you haven’t been to a Habitat ReStore, think secondhand shop where you’ll find cabinets and windows, tile and flooring. Lighting, plumbing, and electrical supplies are in abundance, as are various knobs, fasteners, and doors.

And there’s more: washers, dryers and stoves; furniture; even some tools. Items are new or gently used. You may not find exactly what you’re looking for, but try again next week. You never know, that pedestal sink just might turn up—for a fraction of the cost of a new one.

In the U.S. and Canada, there are 825 Habitat ReStores (23 in Wisconsin). Madison’s Habitat ReStore on Cottage Grove Road opened in 2001. Store Director Jen Voichick recalls that it was because of an ankle injury that the store was born. A carpenter who had been trained in the union-apprenticeship program, Jen had time to think as her ankle healed. If she continued heavy, physical work, she would need a bone fusion. In need of a career change, she had an idea. During her years in the business, she had seen literally tons of waste on commercial and residential job sites. Jen says, “I grew up in Madison. I knew we could do better than that.”

She explored how to divert building materials out of the waste stream and into use. She decided early on to partner with a non-profit, and Habitat for Humanity was a great match. She drew up a business plan and a budget, worked with an organizational consultant to map out the steps and forecast the finances, and applied for and received several grants. After a year, Jen, her father, and a group of volunteers turned what was “a shambles” into Wisconsin’s first Habitat ReStore. She says, “It was a group effort from day one.”

Jen serves as store director with ten staff members, including a dedicated volunteer coordinator who organizes more than 125 volunteers who make all aspects of the store happen. Volunteers are primarily in the 65- to 75-year-old range, and many have a regular weekly shift. One volunteer from Lodi has decided to “retire” after 11 years.

Judy Mayer and Rene Markoff have been volunteering for more than four years. Judy likes the unusual reasons people purchase items, such as the cupola that became a chicken coop. Other volunteers include retired professors and ironworkers, those serving community service requirements, folks in between jobs, and people with disabilities who receive job training. Jen’s face shows how much the volunteers mean to her. “They are role models for me. I want people who come in to thank them for supporting our community.”

Madison’s ReStore is a bit of a big deal in Habitat for Humanity circles. Habitat consultants visit the store to learn about its operation; ReStore staff from other parts of the country come for management training. The store is a success financially, turning a modest profit. It also funds two Habitat for Humanity home builds annually.

Over the last few years, Jen entertained the idea of opening a second store. Last year, she presented a proposal to the Habitat Board. Solid numbers, the lack of competition, and Madison’s bifurcated geography forecast success, and July 2012 saw the opening of Habitat ReStore West on Odana Road. The trick now is to keep enough donations coming in to maintain both operations.

Donations are the backbone of the ReStore. In a down economy, donations are more difficult to come by. The volume of building is less, contractors are lean in their ordering, and supply stores have started their own remnant sections instead of giving away remains. Craigslist is of no help either. The ReStore staff works hard to make it as easy as possible for people and corporations to donate. Their website lists the steps to making a donation and they offer online scheduling for donation pickups. And donations are tax-deductible. As a secondhand store, however, they cannot accept everything; only “what will go right back out the door.”

Jen thrives on connecting people to what they need, whether for remodeling or connecting in a larger sense. Early on, the ReStore began an Earth Day celebration, combining Jen’s loves of sustainability and community. She says that when they began the annual celebration, it was one of the only events of its kind, but she’s happy to see many organizations in Madison now have them.

Throughout her career with the ReStore, Jen has come up with innovative ways to showcase community and sustainability. In April, ReStore will host the Salvage Art Show, its fifth annual fundraiser for Habitat for Humanity. Artists use reclaimed or used materials to create art in any medium. The pieces will be available for purchase in local galleries, including Madison’s Absolutely Art and Hatch Art House, and Artisan Gallery in Paoli.

Jen praises Madison for being a place where you can turn an idea into a reality. “If you have an idea, you can make it happen here. People will be there to jump in.” She is pleased to see other businesses with a positive community impact making it, such as B-Cycle and Full Spectrum Solar. And she points out the importance of working with other like-minded organizations such as Mpower, Sustain Dane, and Dane Buy Local. Reflecting on how she got her start 11 years ago, Jen says, “You never know where things are going to go.”

People who have used the ReStore:

The choice paid off. The renovation was economical, and 90% of the materials came from the ReStore. Jennifer, her partner Paul Sacaridiz, and staff built all of the furniture and shelves. Solid core doors covered with stretched canvas became table- and countertops. Carriage and lag bolts were used to build worktables—at a much lower cost than new hardware. Twelve-foot-long particle boards with multiple coats of sealant were made into durable and versatile shelves.

When Jennifer tells the story of how she found and used the materials, she sees “people’s eyes light up as they realize, ‘Hey, I could do that too!’” She has this advice for shopping at the ReStore: “You may find what you’re looking for, but you may also find something unexpected that can become the seed for a project you’d never imagined.”

Fredericka Schilling and Bonita Sitter
Residential project, Blue Mounds, WI
In 2005, Fredericka Schilling and Bonita Sitter set out to sustainably build a house in rural Blue Mounds. They combed the ReStore twice a week for six months. At times, it felt like they came home weekly with a window of a different size. Their designer and builder were willing to accommodate the finds, but Fredericka’s father was genuinely concerned. “He thought we were out of our minds … that we’d end up with a tree house of 23 different windows.” Instead, people ooh and ahh over their 1,400 square foot home.

The couple bought flooring, granite countertops, cabinets, doors, a sink, beautiful tile, and even cedar shakes that now cover the north side of their home—all from the ReStore. The crown jewel of their build is reclaimed wood from an unusual source. The ReStore advertised a storage building deconstructed by Habitat ReStore volunteers, which could only be purchased sight unseen. The site? The Badger Army Ammunition Plant near Baraboo, WI. Fredericka and Bonita took a chance. Wood originally in the plant (and free of hazardous materials) now makes up the flooring and rafters in their second-floor loft. Fredericka says, “It feels pretty emotional that the blight of bomb-producing went into the construction of two houses. It really is guns to plowshares.”

Lynn Lee & Steven Skaggs
Residential project, Madison, WI
You could easily walk past the old carriage house on Madison’s near east side and not look twice. But behind its unassuming doors are 2,100 square feet of loveliness. In 2009 Lynn Lee and Steven Skaggs bought a falling-down apartment building, and in five months, they moved into a single-family restored gem.

Built in 1845 as a carriage house, the building had been a boardinghouse during the Civil War, and much later was split into apartments. Lynn, an artist, and Steven took the old and made it their own. Some material was bought new, such as tile, wall finish, and lighting fixtures. But ReStore materials far outnumber the new: flooring, cabinets, wainscoting, tile, doorknobs, hardware, light fixtures, molding, and even paint.

Everything in the home appears to be carefully chosen, with seemingly one-of-a-kind light fixtures and an inviting modern kitchen…and then there’s the playroom. Built in the attic, the playroom has Victorian ginger breading, making the space feel like a full-size dollhouse. The home was part of the first Habitat Sustainable Homes Tour, and as Lynn, Steven or Jen will tell you, it is a poster child for the ReStore.