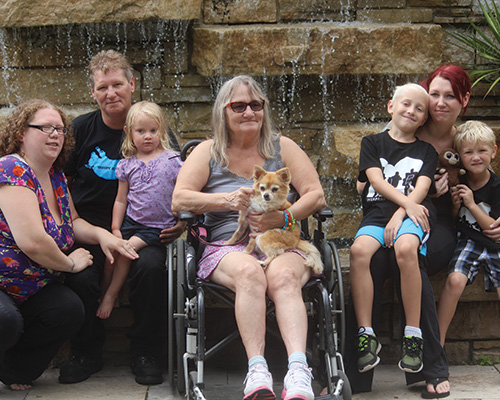 I met Carrie (Chaous) Riddle, a 50-year-old lesbian grandmother who works for the City of Madison as a snowplow driver, among other things, a couple years ago at a workshop on homelessness in Madison. Last winter, she “mothered” me through an intense, emotional, traumatic experience, healing a big part of my family history.

I came to admire Carrie for her protective, loving nature, her inner strength, her energy, and her resilience. I also learned a lot about the positive work she does in our community.

You do a lot of volunteer work. What inspired you to work on behalf of the homeless?  I was a homeless runaway as a teenager. When I was single with my kids, and with no child support, I would switch housing when the rent went up and I didn’t have money for the security deposit. I’d be homeless for at least a month with two kids, a dog, and a cat. I was labeled a “bad” teenager, so I had a lot of experience. I knew the resources.

I got involved with the first Occupy group on East Washington Avenue. I did not like what was happening there. It turned into a place with a lot of drinking and drugs. I stepped out of it.

A little while after the East Washington group dissolved, another one formed, got kicked out of their location, moved to land in front of the Dane County Human Services building off Northport Drive, and then were forcibly moved to Token Creek. From going out to Token Creek, at Christmastime, I saw that kids were falling between the cracks.

How did you get volunteers to help with Santas Without Chimneys so quickly?
I’m a member of the Autonomous Solidarity Organization (ASO). I help with the ASO Brat Fest.  I know I can always get the help of the ASO members. Feeding State Street Families (FSSF) is a sister organization to Stone Soup, another group I started.  FSSF serves the homeless on the streets. They can receive in-kind, tax-deductible donations. If I ever have to, I can rely on FSSF to help me with Stone Soup, especially with sleeping bags, hand warmers, etc. A list of needs and a wish list are on the Stone Soup Squad web page.

This year you may be serving even more children. I understand you learn about them and their wishes through the schools and Dane County Human Services. Because we’re moving into the winter months and the holidays are coming up again, I’m wondering if you want more people to be involved in either Stone Soup or Santas Without Chimneys?   We can always use help, either with donating and/or delivering. A lot of people tell me they really appreciate and enjoy the experience. Ed note: Anyone interested in contacting Chaous can do so through Caroline’s email address: cwerner@ourlivesmadison.com

Why and how did you start up Stone Soup, and what is it exactly? What do you tell people when they tell you you’re “enabling” the homeless?   I pretended I was homeless one winter. The first time, I’d forgotten a sleeping bag. A homeless guy offered me some of his blanket. Another time I went out, it was New Year’s Eve and one of the coldest nights of the year. I had two sleeping bags in the trunk. Two other people needed bags, so I gave them mine. I went to the store and bought $60 worth of cheese and crackers to celebrate the New Year. I also ran around all night giving guys hot tea and ended up with hypothermia. That is how Stone Soup was born.

You’ve told me that people have told you that you’re enabling the homeless to stay outdoors by feeding them and giving them supplies.   Everybody has the right to not freeze to death at night. Stone Soup volunteers don’t care what your issues are. You have the right to see the next morning. Some of these guys are not allowed in shelters, so how are we enabling them? Some of them are banned [from shelters] for life.

I managed to get a couple people into rehab. Stone Soup helped get six people off the streets last winter.

This summer I was contacted by the Veterans Administration outreach street team. They asked me to help them serve the veterans I find. So now I’ll be doing a “warm hand-off” of the veterans to their street team.

I received an award from the AFL-CIO for my work with Santas Without Chimneys and Stone Soup, which I shared with all the people who helped because without them it wouldn’t have been possible.

Carrie, I met you because of my interest in LGBT homelessness. And I know you as more than a rebel. Your knowledge and energy as a Druid got me through a very difficult event in my life recently. I experienced your nurturing qualities. How does your spirituality help you live your life?   I worship nature, if anything. I believe everybody has worth. So if you look at my commitment to homeless people, they have worth. I just listen to them, and that’s important. I want to know what they’re thinking and feeling. I see the injustices. The earth is screaming for help, and I hate bullies so I’ll stand up and fight for the earth. n

A bill introduced at the Capitol on Tuesday, March 2, would force schools to strictly regulate participation in sports based on “biological sex as assigned by a doctor at birth.”

When Nafeesah Waziri joined American Family Insurance as a claim care center representative in Denver almost nine years ago, she wasn’t sure what to expect. Waziri, a lesbian and first generation American, treated her first year with the company as an opportunity to...

Historian Richard Wagner reflects on the Religious Society of Friends, and how the Madison Quakers came to adopt a position supporting same-sex marriage.