Major Loren Carter cuts a modest figure, even in his well-kept Salvation Army officer’s uniform. His tone is even and sincere when he talks, and though the organization he coordinates is currently in a hard struggle for continued support in liberal Dane County, Carter is more dedicated than ever to continuing the work.

But that work has been threatened by a recent severe downturn in the amount of donations that come in to the organization through private giving. Carter explains that the SADC gets most of its funding from the community: just $1.2 million of their $4.6 million budget comes from government grants. And the SADC has one of the highest ratings for a social services organization, with 85 cents of every dollar raised going directly back into their outreach programs.

And, Carter is sure to point out, all of the money raised in Dane County stays in Dane County. When you put change into one of their red kettles, it goes directly to help your community.

Asked why he thinks that might have been the case, Carter smiles, a little wearily, and explains that there’s no way to know for sure—people carrying less change, the continued recession—but admits they’ve also gotten “notes in the kettles from people explaining why they can no longer donate to us.”

The reason? Recent stories, most often circulated on social media during their summer and holiday bell ringing campaigns, which highlight one particular case over and over again.

In 2012 pop star Darren Hayes called for a boycott of the Salvation Army worldwide over their perceived anti-gay bias. In response, a radio show in Melbourne interviewed Major Andrew Craibe, a Salvation Army Media Relations Director based in Australia, to ask him about those accusations. Craibe’s response to the questions were damning and seemed to indicate that he, and the Salvation Army, believed that gays should be punished with death.

The Salvation Army’s position statement on the subject of homosexuality refers to scriptural prohibitions on same-sex relationships and calls on gays to live in celibacy. It also notes that “there is no scriptural support for demeaning or mistreating anyone for reason of his or her sexual orientation. The Salvation Army opposes any such abuse.”

But Craibe’s individual interpretation of Old Testament scripture and poorly worded answers were circulated the globe over and held up as the word of the entire Salvation Army organization. “He was expressing his personal bias. It wasn’t a reflection of the Salvation Army as an organization,” Carter insists.

Many local businesses have since dropped their support for the SADC, though, declining to allow bell ringers to stand in front of their stores, and donations to the kettles have declined significantly.

Lost in the din was the Salvation Army’s own response to the controversy, and it’s one that seems to perfectly reflect Carter’s views and those of the staff who work in Dane County: “Members do not believe, and would never endorse, a view that homosexual activity should result in any form of physical punishment. The Salvationist Handbook of Doctrine does not state that practicing homosexuals should be put to death and, in fact, urges all Salvationists to act with acceptance, love and respect to all people. The Salvation Army teaches that every person is of infinite value, and each life a gift from God to be cherished, nurtured and preserved.”

“I care about anyone who walks through our doors and says, ‘I have a need,’” Maj. Carter says simply.

Indeed, SADC works hand in hand with both OutReach and Willma’s Fund to see that any LGBTQ families or individuals that walk through their doors have their needs specially met. “We won’t turn anyone away,” Carter adds.

Donald Haar started Willma’s Fund specifically to assist homeless LGBTQ people who were not being served by the traditional shelter system, either because they were being turned away by certain religious organizations or because they were meeting with physical and/or mental abuse from fellow shelter inhabitants.

At a conference on homelessness organized by OutReach and Willma’s Fund (with help from the SADC) earlier this year, Haar noted that he’d originally had the idea while working at the Salvation Army shelter, where he overheard someone say, “We’ve got nothing for transgender persons.”

Indeed, Carter acknowledges the fact that traditional shelter set-ups are often unable—or flat-out unwilling—to help transgender individuals. And that’s why, he says, their relationship with OutReach and Willma’s Fund is so important as they’re able to better meet their needs.

Same-sex families in need are fully welcome in the shelters and other programs offered by SADC.

“We’re relying on [donations from] thousands of people who care about their community,” Carter explains. “We want to be respectful of that, to be good stewards of that.”

Outgoing social services coordinator Leah Weber did a lot to bring SADC up to speed, Carter goes on to say, by organizing educational training sessions that aimed to help staff be more inclusive and sensitive to the specific needs of the LGBTQ community, among others.

As for the religious underpinnings of the organization, Carter doesn’t shy away from them but insists that they are never a prerequisite for receiving services.

“We don’t want to impose anything because that pushes people away. It makes it worse, not better,” he says.

Carter explains that part of the intake process for families and individuals seeking help from the SADC involves a sit-down conversation with him and his wife, wherein they explain all of the services that are available—including religious ones. “We may sow some seeds,” he says, “but whether they grow or not is up to the individual; it’s not something we impose on people.”

Scott Peterson, the newly hired Director of Community Relations, recalls meeting a young man who had moved to the area from the East Coast, having been pushed away from shelters there because they did require religious adherence to receive services. He was dubious about the SADC but ultimately impressed by the fact that there were no requirements and that LGBTQ people were welcomed.

“People start to look at the entire organization through one man’s words, and that’s really unfortunate,” Peterson says of the Craibe incident. “But I want to emphasize that donations go right back to the most high-risk, vulnerable populations right here in Dane County.”

And they’ve been doing that for nearly 125 years, since the chapter’s founding in 1890. Carter and the organization hope that, with continued outreach, they’ll be able to continue the mission for years to come.

“If you read our mission statement, it talks about the gospel of Christ,” Carter explains. “The second prong of it is meeting the needs of humanity—without discrimination.” 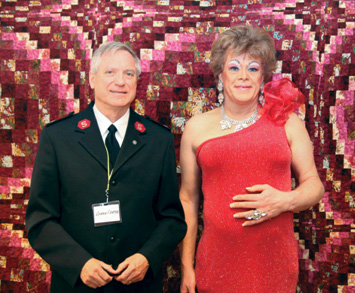 Founder Donald Haar explains how Willma’s Fund and the Salvation Army work together to help LGBT people in need.

As a Salvation Army employee and the founder of Willma’s Fund for homeless LGBT people in Dane County, I can assure you that the Salvation Army of Dane County DOES NOT DISCRIMINATE against anyone for services or employment.

I whole-heartedly believe in the mission of the Salvation Army, especially here in Dane County.

The only things the Salvation Army asks are “do you have a need?” and “how can we help?”

They do not ask about sexual orientation or gender identity. The slogan “The Salvation Army is all about deeds not creeds” is true; they truly practice what others simply preach.

I am gay and very out here at the Salvation Army, and I have worked here for nine years. Of all the jobs I have had, this is by far the one where I have experienced the least amount of any type of discrimination.

I am also a drag queen, my drag name is Willma Flynn-Stone, and everyone at the Salvation Army of Dane County knows that. Willma’s Fund holds drag shows to raise money to help homeless LGBT people with a focus on transgender people. The Salvation Army of Dane County has assisted with housing my transgender clients in hotels on many occasions. We usually split the cost; the Salvation Army pays for a week and Willma’s Fund pays for a week. I am also aware of a family of two gay men and one child that stayed in the family shelter.

The Salvation Army provides hotel rooms for transgender clients not to discriminate but to protect them because they are not safe in any shelter, as the other clients often attack them verbally and/or physically. This is true at most shelters. Most LGBT homeless people I’ve talked to say they feel safer on the streets than in the shelters.

The Salvation Army was a key partner in the 2014 LGBT Homelessness Conference, which was a collaborative project with the First United Methodist Church, OutReach LGBT Community Center, and Briarpatch Youth Services. We gathered 105 people, mostly social service providers that work with the homeless community, to begin addressing the barriers to serving the LGBT homeless community. Major Loren Carter and 15 other Salvation Army staff were in attendance.

I also strongly urge you to learn more about the Salvation Army by volunteering.

The Human Rights Campaign of Wisconsin, Fair Wisconsin Education Fund, and a coalition of LGBTQ+ and allied organizations held a forum with the candidates in the Wisconsin US Senate Democratic Primary.

Expressing themself through the art of drag, Jason Luu’s persona Melee has been elevating Asian drag representation in Milwaukee and beyond.

Navigating without a Map

GSAFE youth Avi Mack shares what it’s like to navigate life as a biracial youth.

David Ryan-Sukup and Colleen Frentzel share information on life insurance to help you find coverage that meets your needs.

Apathy is our Enemy

After the fall of Roe v. Wade, attorney Michele L. Perreault warns that there’s a real possibility that Obergefell v. Hodges will, too. It’s time to vote like our lives depended upon it.

Telling Our Own Stories for 15 Years

To celebrate Our Lives’ 15th anniversary, Our Lives editors past and present speak about its early challenges, lasting relevance, and place in Wisconsin’s history of queer media.

Recognizing the reality that queer people are too often still excluded or marginalized in faith spaces, two sister projects, LOVE and FAITH, are starting up for queer spirituality and faith. Both projects center youth and young adults who have been marginalized by...

Room to Be You(th) Group

Webinar: Establish a Professional Domain, Website, & Email for Your Business