Rise of the Food Carts

While we do have lesbian farmers in Madison, we do not have a taco truck on every corner. Yet. What we do have is a plethora of food carts, and what they lack in ubiquity they make up for in variety and social activism.

More than 30 of the carts’ owners have come together to create Let’s Eat Out, an organization that hosts a number of fundraisers and brings subsidized meals into food desert neighborhoods. For the last three years Let’s Eat Out has held an annual Fall Food Cart Fest as a fundraiser for their Carts for the Community program, where local, at-risk youth get hands-on business and food service training.

This is all well and good, but let’s get to the tasty part: FOOD. I packed up my second stomach (Kye Richards), headed out to the Fall Food Cart Fest, and endeavored to try something from every cart. Here are some of the highlights:

Rib tips with bread: Forget the bread—this is all about the ribs. They are excellent. There was a strong smoke flavor, which seemed to be mostly mesquite. The meat was tender and separated from the bone easily, but still had some good chew to it, not over-cooked or mushy. The sauce was ideal: tangy, with just enough sweet to balance. 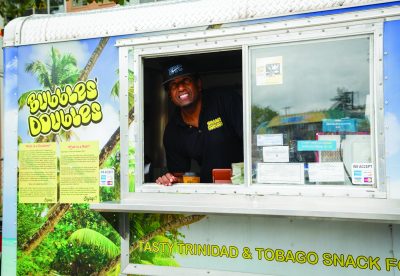 Chicken roti with TnT, cucumber, and tamarind sauce: Bubbles Doubles specializes in food native to Trinidad and Tobago. If you’re not familiar with the food (I was not) the proprietor is eager to tell you about it. A roti is basically a burrito with fried flat bread serving as a tortilla. This was delicious. There was lots of flavor going on in there and a surprising amount of cucumber smell. The chickpea takes a back seat to the subtlety of the chicken. There was a bit of a delayed spicy burn, but it was in no way unpleasant.

Vegetarian momo and chicken momo: A momo is essentially a dumpling—like a pot-sticker but more substantial. The vegetarian momo was primarily cabbage with cilantro, and it had a very nice crunch to it. The wrapper was green and had a slightly sweet flavor. The chicken momo had a stronger flavor, with a potent garlic-onion note and also had a sweeter salsa-like sauce inside. The overall experience was joyous. The plate came with sliced vegetables that had been tossed with spices and was fantastic. There was a red sauce available that I would describe as “Danger-hot.”

Chicken kabob plate: The kabob (in patty form) came on a bed of rice and a little bit of salad consisting of cucumber, onion, tomato, and mint. The kabob was the star of the show—chicken heavily spiced with a powerful cumin flavor. It was melt-in-your-mouth tender and an all-around pleasure on the tongue. The rice was dry and low on flavor. The salad was a touch sour and enjoyable. The mint cilantro sauce seemed oddly salty to me and the garlic tomato sauce seemed “off” to Kye. Overall strong on the fundamentals for a new cart, and I hope to eat there again.

Classic grilled cheese: There is a lot of amazing, exotic food to be had from Madison food carts, but there is also something to be said for rocking the basics. This was the only plate that Kye and I fought over. I considered scooping the last drip of cheese out of the tray. Great crunch, good stringiness on the cheese, ’nuff said.

Pork taco: This was a soft-shelled, very meaty taco that was so full, it was difficult to pick up. The corn tortilla may have been homemade. While the taco was in no way bland, there was no stand-out flavor, no punch to it. This was a high-quality taco, and I would not hesitate to nosh again.

Pumpkin pie cheesecake: This was a cupcake-sized cheesecake with a gingersnap crust with pumpkin pie spice. The crust on mine was a bit mushy, but I didn’t mind. As another customer said, “It is so good you can’t stand up while eating it!”

Rice and beans with pork: The pork flavor was strong and amazing. Succulent pulled pork, on top of red rice and a side of beans. The rice was a bit crunchy (Kye liked the texture) and the cilantro was nice—but the pork…this could be the pig of my dreams.

Turkey panini: This is what every panini dreams of being when it grows up. The bread has a delightful crunch, and the red onion with the pesto blend well with the warm cheese to create a fantastic mix of flavors and textures in the mouth. Fantastic.

Chicken tamale: This tamale reminded me of the ones the Mexican women in my neighborhood made for their families when I was growing up in California. It was the best I have had in Wisconsin. It was hand-rolled and steamed in a cornhusk the way goddess intended. The filling is a perfectly spicy green chili with chicken. There was a bit more masa than I like, but a large tamale of this caliber for $3.00 is not something I am going to gripe about.

Mr. Sweet Potato Head: While I try not to put anything with the title “Mr.” in my mouth, I made an exception this time. This was pan-fried sweet potatoes in slider (not burger) form. The sweet potato has a soft texture and manages to provide a joyful contrast between savory and sweet. I have consumed many of Slide’s sliders in the past and never been disappointed. This was no exception.

Interests:
Food & Dining In the Community

Tags:
Food Cart Fest food carts food reviews Madison Vivienne Andersen Wisconsin
permalink https://ourlivesmadison.com/article/rise-of-the-food-carts/ While we do have lesbian farmers in Madison, we do not have a taco truck on every corner. Yet. What we do have is a plethora of food carts, and what they lack in ubiquity they make up for in variety and social activism. More than 30 of the carts’... Life in the Middle Publishing, LLC 2016

Ayurveda in the Garden