Ben Bisbach and Cody Egan felt driftless until they found organic farming, a life-work journey that’s taken them across the country and back again.

For the past six years I have traveled the country with my partner, Cody, working on organic farms. Organic agriculture is our career and our passion, but we didn’t start out that way. In fact, when we met as undergraduates at U.W.-Madison, farming was nowhere on our radars.

I was studying Forestry, and Cody studied History and International Studies. It was 2008. A mutual friend was having a birthday party, and she introduced us to each other with this kind of implication like, “You are the two gay people I know, you should be friends.” We actually hit it off and ended up hanging out quite a bit that summer, but things fizzled after a few months and we went our separate ways.

Over the next couple years we would occasionally run into each other but things always felt pretty awkward. Then, in the final semester of my senior year, I had a class with his best friend and we were assigned to work on a semester-long group project together. As a result, I ended up seeing a lot more of him again and we started to fall into more of a friendship. I don’t really know what was different this time around but things started to click—we spent more and more time together and, by September or October of that year, we were inseparable. A few days before Christmas 2010, I woke up to a rambling, adorable voicemail from Cody saying he liked me and asking if I wanted to be his boyfriend.

Incubation of an idea

We had each other, but that was about the only thing we knew for sure. We were both freshly graduated into the depths of the Great Recession, and like so many others we found ourselves floating along, doing whatever odd jobs we could find. Cody was working as a nanny for a family in Maple Bluff, and I was a “chocolatier” at the Godiva store in West Towne Mall. We were anxious about the future, and often struggled with depression.

In those times, during winter, we were in the habit of taking long walks around Madison that we called the “walk-venture drink-tacular.” We would pack a water bottle full of booze and go out at night and walk miles and miles around the city. It was a way of coping with the bleak cabin fever conditions of the season. On one such walk, Cody was reminiscing about a trip he had taken to Costa Rica as part of a summer class. On this trip they had spent time working on an organic farm. As he talked, it sounded so appealing—to work outside, to care for plants, to do something meaningful by producing food. A thought gradually occurred to us: why not do that now?

Neither of us had ever had an interest in agriculture before, and we weren’t particularly tuned into local/organic food issues, either. Feeling like I was wading into uncharted waters, the next day I went to the Ground Zero coffee shop on Williamson Street with my laptop and searched “organic farm jobs” online. I quickly found the website attra.org, which maintains a database of positions at organic farms all over the country. Apparently our idea was already a real thing! There were more opportunities available than I could have imagined. I discovered that many farms offered formal apprenticeships, where you are not just a laborer but are actually there to learn, too.

Applying for a job as a couple is unconventional enough, though some farms actively recruit couples. For us as two gay men, though, we really had no idea what to expect. When we emailed different farmers we were always very clear in the beginning that we were together. There was always the chance that, when someone didn’t respond back, that was why. I can honestly say, though, that in all my years doing this work I have never once experienced overt homophobia within the organic farming community. We were simply treated like people, which, in my mind, is exactly the world I want to live in.

As our search progressed we began to feel that, while there were many farms in the Madison area, it might be much more interesting to go somewhere else. Grasping the opportunity, we started to think in terms of “where do we want to live?” and then looked for farms in that region. I can’t remember exactly why, but we began to focus our efforts on the Puget Sound area of western Washington. In the end we were offered positions at Persephone Farm, a small CSA and market farm across the sound from Seattle. Just a little over a month after we got this crazy idea, we packed up our little Chevy Cavalier and drove across the country.

Once we got to the farm and started working, it didn’t take long: there was no single moment, but rather a gradual understanding of this is it. This is what I want to continue doing with myself. Here is something where I can work with my hands, as well as my head, where I get to use every part of my brain. Farming requires knowledge of biology, chemistry, economics, marketing, mechanics, ecology, carpentry, finance, botany, meteorology—you have to know a little of everything. It’s working outside in nature, doing something tangible and real and within the small, local economy, and that helps people and the planet.

The work is never the same; from day-to-day, week-to-week, your life changes with the seasons. That Cody felt essentially exactly the same way was nothing short of a miracle. We found our strengths actually complement each other extremely well—I tend to think in terms of the big picture and how everything fits together, while Cody is excellent with organization, management, and details. Within a few months we had resolved to learn all we could about organic agriculture and work towards starting a farm of our own.

And working with Cody—while I’d be lying if I said there weren’t challenges, or that every day is easy breezy, it is actually kind of astonishing to me how seamlessly it has gone. I think for many couples doing what we do would be unfathomable. We are together pretty much 24/7. All the frustrations and challenges and unpleasantness that comes with any job are things we share together and deal with within the context of our relationship. On the flip side, all the inevitable challenges of a relationship, we deal with in the context of our jobs. There is nothing worse than a day we get into a fight and then have to pack 130 CSA shares together, but we also share all the satisfaction and meaning and rewards. For so many people, work is a place you go out of necessity, where the rest of your life is put on hold. For us, our “work” and our “life” are the same thing. 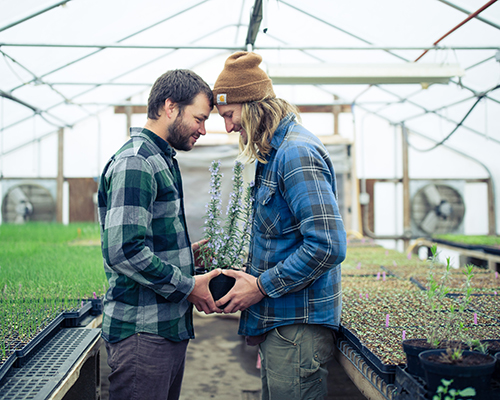 As our apprenticeship at Persephone Farm drew to a close, it was time to move on. Migrating across the country to explore a completely new environment, where we had never been and knew no one, had been an extraordinary experience. Why not do it again? This time, with a year under our belts, we were able to seek out farms that offered a bit more responsibility. This time we focused our efforts on the northeast and ended up at another little CSA farm outside of Ithaca, New York. It would be another year of exploring a new landscape and meeting new people. We also gained a radically different perspective on growing techniques and practices. No two organic farms are alike, and no two organic farmers are alike—each has their own systems and philosophy, their own techniques, and their own strengths and weakness. By moving each year, we were able to take the best of each farm with us, while also gaining invaluable insight into what not to do.

After New York, we set our sights on the mountains, specifically Colorado, taking positions at a farm located at 6700 feet above sea level. It was year three of the journey for us, though, and there was an element of ambivalence beginning to creep in. We began to anticipate what was to come: just when we had started to forge genuine friendships and become really attached to a community and sense of place, it would be time to leave. We also began to realize that, by having to start over every year, we were holding ourselves back. We made the decision that it was time to come home and begin the long-term process of building something here.

In early 2016 we moved back to Wisconsin and were hired as managers at Emerald Meadows Family Farm in Columbus, just northeast of Madison. We grow certified organic vegetables and cut flowers, as well as corn, soybeans, and oats. We are making connections, and becoming deeply embedded in a thriving local food movement we barely knew existed before we left. You can find Cody and me at the Eastside Farmers’ Market (Tuesdays from 4 to 7 p.m. in Central Park in Madison) and our CSA still has shares available for 2017 (facebook.com/emeraldmeadowsfamilyfarm for more info).

Together, Cody and I hope to build a sustainable life and work in the soil we’ve always called home.