A lifetime of working with and for children of all abilities has taught the Wisconsin Historical Society’s Vaunce Ashby much, including the importance of bringing your whole self to the table.

In 2007, Vaunce Ashby was at a crossroads in her personal and professional life. She was closing out her first year as a school principal, a dream of many lifelong educators. However, that year also brought the death of her mother and managing complications from Lupus, a disease that was starting to affect her kidneys and her body’s connective tissues.

“My rheumatologist said, ‘You need to take a leave from work. You cannot continue at this rate, or you’re going to kill yourself,’” she said.

Ashby also faced resistance from some of her staff as she pushed them to hold high expectations for all kids, no matter their backgrounds. As a Black, lesbian, woman, she also wondered if those same prejudices influenced the way some of her staff responded to her as their school leader.

As she contemplated whether to stay and fight or seek other opportunities, she recalled her departed mother’s advice.

“I remember talking to my mom for a long time, and she said, ‘Honey, you don’t sound like you’re happy. If you can’t sleep with yourself, no matter what they’re talking about, you need to leave that building,’” Ashby recalled.

“I went in and told my staff (I was leaving). I remember standing there and saying, ‘You guys are not happy with me, and all I want to do is help you teach kids, all kids, at this school. Rather than spending all your time talking about what you’re going to do with me, I’d rather you focus on kids, so I’m going to move out of your way.’”

Looking to the past to build a better future

Although leaving behind her school was a difficult decision, Ashby would spend the next 10 years making a difference for kids across the state of Wisconsin. Currently, Ashby serves as the Director of Education at the Wisconsin Historical Society. In her role, she is responsible for creating innovative and dynamic experiences to help the museum’s visitors, particularly students, authentically connect with Wisconsin’s rich heritage.

“For some students (visiting a museum) is their orientation into the history of Wisconsin,” she said. “By developing a detailed plan for new museum projects, I have the power to develop and build on exciting exhibits for kids. How can you not be excited being able to do a job like that?”

Ashby’s work today is laying the foundation for the Wisconsin Historical Society’s future projects, which will better reflect the contributions of people of color and LGBTQ+ people to Wisconsin’s history.

“I would like to think that every person of color will come into come into the museum and realize that someone was mindful in trying to ensure that the history of people of color in our state were included in the exhibits,” she added.

“That’s what I do every day—make sure that our voices are being heard—and I think I’m pretty lucky.”

Ashby has always been an advocate for children, in particular, those with exceptional needs. Growing up, her best friend was a child born with a physical disability. Ashby was fascinated by how well her friend was able to navigate the world, despite her body’s limitations.

“Whatever I was doing—knitting, crocheting, cutting paper—she had already figured out how to adapt it,” she said. “It got me to thinking about kids who do things differently in general, whether it’s learning or a physical thing they have to change for. I was always interested in that.”

By high school, Ashby had made up her mind that she wanted to be a special education teacher. “My mother cried,” she said with a laugh. “I did really well in math and science, so she was pretty sure I would be a doctor.”

As a first-generation college student, Ashby’s mother wanted her to pursue a more lucrative career path, but her passion was working with young people.

“At that time, in Chicago, teachers were on strike every other year, so she’s like, ‘You’ll never have a consistent job, you won’t be able to take care of yourself,’” she remembered. “My aunt said, ‘You need to do what you love. You’ll be doing it for the rest of your life, so whatever it is you decide you want to do, make sure it is something you love.’”

Ashby’s 38-year career in education has taken her to classrooms throughout her hometown of Chicago and across Wisconsin. Her first job, teaching at a therapeutic day school for children with emotional and behavioral disorders, allowed her to help students develop coping mechanisms that they could take with them beyond the classroom.

“The students were able to be responsible and own their emotions and their responses, which left them feeling somewhat in control. I think we did a fabulous job with the kids we had,” she said.

“We also had counseling for parents in the evenings, and we had a bus that would go pick them up. We had a full kitchen, so we would make dinners for the parents. It was a really great therapeutic program.”

She learned skills there that profoundly influenced her work moving forward, especially around cultivating relationships with students.

Ashby wanted to provide her students with the same level of patience and support she received from her family growing up. Her Catholic upbringing emphasized the values of love and acceptance. Her family exemplified those values when she came out to them in high school.

“There wasn’t a disconnect for me between my faith and my sexual identity,” she said. “It was never an issue in my immediate family, even with my grandmother. I think that has led to a different perspective for me going through the world.”

In the classroom, Ashby was a bedrock for her LGBTQ+ students, some of whom did not have the support of their families because of their identities.

“There were a number of times I was aware of students being kicked out of their homes late at night during the weekend. I would ensure the student had a warm, safe environment to stay in until a permanent solution could be set up,” she said. “It just amazed me how many families did this to their kids. I remember telling my mom, and she was outraged that parents would do that to a child.”

She did not keep her identity a secret from her students and often encouraged them to use her, their peers, and programs at their schools, like GSAFE, as resources. For Ashby, it was important not to be silent around identity issues, especially after losing a transgender student to suicide early on in her teaching career.

“I had this rainbow folder in my desk, and the kids who weren’t comfortable coming to meetings would just come and get the handouts from my desk,” she said.

District officials noticed how well Ashby was able to connect with her students and encouraged her to think about administrative positions. As she shadowed district leaders, she saw how much their decisions informed what happened on the ground in classrooms.

“I would go to different meetings with (a district administrator) and sit and listen to how she reallocated resources to assist schools in making some changes to kids lives,” she said.

“That’s the piece that stuck with me. I can touch one student’s life, a total of 30 during a school year, but she was able to impact the education of all the students in a school, maybe a district. She could use whatever resources to address key areas of struggle based on students’ needs. There is something to be said for that.”

Ashby has worked in administration at the school, district, and state level. In her role at the Wisconsin Department of Public Instruction, she co-authored and lobbied the state to pass the Specific Learning Disability rule, which developed guidelines educators must follow before they are allowed to recommend a student for special education services. Ashby believes the SLD rule helps to mitigate bias against students, particularly students of color.

“It was an effort to update the criteria while requiring focused documentation on the help students receive prior to being evaluated for special education needs,” she went on to say. “The hope is it will cut down on the over-representation of African-American, Latino-Hispanic, Native-American and/or economically disadvantaged youth in special education. The hope is this updated rule will help with this by asking for details about interventions that were used with the student.”

Ashby is grateful for the opportunities she’s had to tangibly improve the educational experience for Wisconsin children. She hopes her work will inspire children and help them discover their futures by taking a look at the past.

“What a way to go out on retirement,” she said. 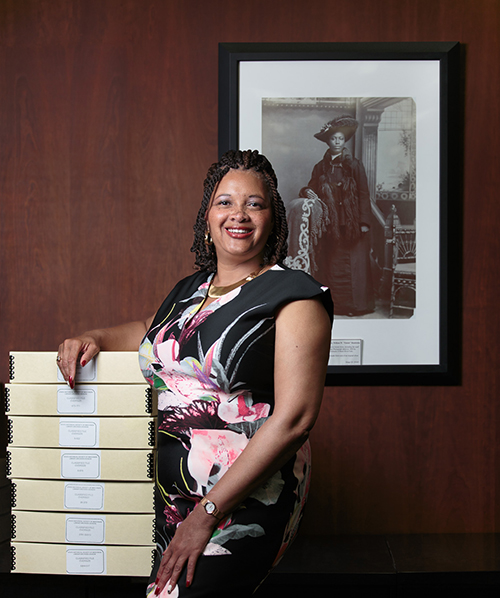 Vaunce, inside the Wisconsin Historical Society Archives at 816 State Street in Madison. Behind her is an 1893 studio portrait of Mrs. William W. “Fannie” Hendricks that appears in the book Wisconsin Death Trip, by Michael Lesy.

Tags:
Amber C. Walker Vaunce Ashby Wisconsin Department of Public Instruction Wisconsin Historical Society
permalink https://ourlivesmadison.com/article/the-childrens-advocate/ A lifetime of working with and for children of all abilities has taught the Wisconsin Historical Society’s Vaunce Ashby much, including the importance of bringing your whole self to the table. Life in the Middle Publishing, LLC 2017