Motivated & Empowered
Farm to (Cafe) Table
Embracing Vulnerability
The Long Fight
Congrats! We Can Marry. Now Should We?
Qualitative Research Surfaces on Wisconsin Trans* Youth
Centering Desire in Our Work
A Camp Fantasy
Welcome to the Dollhouse
Figuring It Out
Justice Warrior, pt. 2
A Song in His Heart
Ferguson to Madison: A Black Queer Synopsis
Emotional Landscapes
View Full Issue

Welcome to the Dollhouse

This month Plan B cast member Trixie Mattel becomes the first drag queen from Wisconsin to compete on RuPaul’s Drag Race. Out of drag, Brian Firkus shares the inspiration for his alter ego.

Stepping into the world of Trixie Mattel feels a lot like walking into a life-size plastic Barbie dollhouse. Everything is in different shades of pinks and pastel blues, and proportions are all exaggerated to the extreme. Trixie’s creator, Brian Firkus, means it to be that way. As he puts it, “Trixie is kinda like the Barbie doll I never had but always wanted.”

This month he gets to share Trixie with America, as she becomes the first contestant from Wisconsin to appear on hit reality show RuPaul’s Drag Race. We sat down with Brian to learn about what brought him to this moment and where he hopes to take it.

So let’s start with where you are from.  I am from Silver Cliff, way up north in Wisconsin. I literally came from a trailer on a dead-end dirt road. I didn’t come out until college, but I always knew. I just kept it to myself until I got out on my own.

How did your family handle your coming out?  I have a gay aunt, so I was never scared that it was going to be a problem. But I knew I wasn’t going to be dating in high school, so I didn’t see the need to address it right away.

When did it finally come up?  Freshman year of college. I lost my virginity in the most stereotypical way possible: on a bunk in a dorm. Right after that, I called my mom and told her I had a boyfriend. She kinda made me feel silly for even thinking she’d have a problem with it. The drag queen thing I think took her a little longer to come around to though. At first I think she thought it was more my gender identity and sexuality. 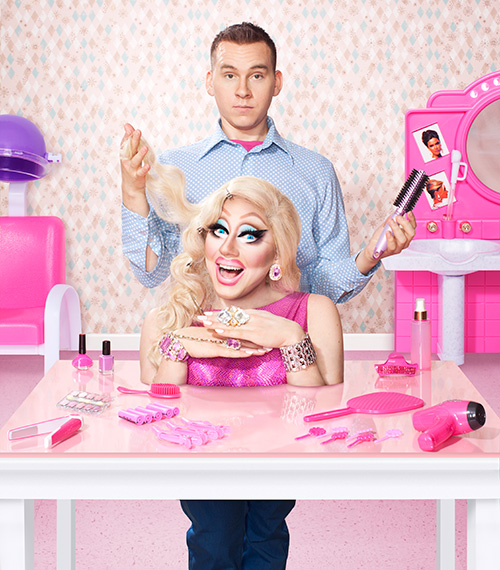 And Along Came Trixie

At what point did you discover drag?  When I was 18, I was in The Rocky Horror Picture Show at the Oriental Theatre in Milwaukee. Someone who played a drag role was sick, so I had to step in unexpectedly. If that person hadn’t been sick, I don’t know if I ever would have tried it. It just so happened that the character’s name was Trixie, which felt like fate. I had a rough relationship with my stepdad, and whenever I was acting effeminate he would call me a Trixie, like it was a slur. I really hated that word. So it was eerie that when I did drag that night, the character was Trixie. She helped me take back the night! Now I love that name.

At what point did it go from a one-time thing to something regular?  I did it a couple times after that, then regularly with Rocky. When I turned 21, I went in drag to see BeBe Zahara Benet at the LA Café in Milwaukee. I got scouted for a gig that night. When I first started, I wanted to be fierce, but the more I embraced comedy, the more the aesthetic developed into a living doll.

So that’s how you landed on Trixie’s character?  I’ve always been obsessed with Barbie but wasn’t allowed to have one as a child. Dolls always seem like they have everything, so Trixie’s kinda like the Barbie doll I never had but always wanted. She’s the antithesis to what I was like growing up. She’s also like a Stepford wife because of how blown-out and hyperfeminine she is.

Trixie has very distinct makeup. Where does it come from?  I was looking at vintage dolls from the ’70s and began painting my face the way they were drawn. The more Trixie embraced comedy, the more I wanted her to be a 50/50 split between a clown and a living doll. If you’re supposed to paint for the back row in drag, I like to think that I paint for the Denny’s down the street. The cheeks are strong because I want you to know that I am a man. I want you to be like, “This idiot has paint on his face.”

How has the Wisconsin drag scene recieved Trixie?  In Wisconsin I’ve always been treated weird for being different. I’ve had lots of queens tell me I could be so much more if I was XYZ, and honestly, that’s not what I believe works. I’ve never left my house and paid money to see your run-of-the-mill showgirl queen.

So what do you want your audience to feel when you are performing?  I want them to feel like they are 10 years old on Christmas and just opened their favorite toy. I want the fantasy to be so over-the-top that they have to go along with it. I’m not taking it too seriously, so they see they don’t have to either. I don’t know what’s going on in people’s lives, but when they are at my show, they get to escape from it for a while.

Life Out of Drag

What has dating been like since creating Trixie?  In drag, there are two schools of thought around this. When you tell a guy you like that you do drag, they are either like, “OMG that is so cool”—your art is amazing, and they respect that you work hard and do something that you care about. Or you tell somebody and to him it compromises your masculinity, and he can’t see you romantically anymore. He can’t see you fully as a man.

Since I started, I’ve been lucky enough to only be single a small amount of time. In that window I’ve sometimes put what I do for a living in the closet to keep people interested in me. That was always really weird. It felt like having to inform someone on the first date that I had a terminal illness just to see if he’d still want a second date. It’s funny. If I phrased it like I run my own business and I create and sell a product, then they’re usually like, “Oh, cool.”

Have your own thoughts on drag changed since creating Trixie?  There’s a lot of vulnerability to being a man who dresses in drag, but there’s a lot of power in being a drag queen. When I first started doing drag, I was a little ashamed of how much I loved it. Now I feel like it’s my superpower.

It’s amazing how comfortable I’ve become with my perception of masculinity. When I first started, I was daring myself to do something feminine. Now, putting on this other persona makes me feel happy to be myself. No expression of yourself should make you feel less like a man.

It’s official. Your season has the first queens from Wisconsin on it. While we wait for it to start, can you tell us about some of your favorite queens from the past seasons?  BenDeLaCreme. Raven. Alaska. I love anybody who has really developed his or her character. I especially love queens like Ben that do a kind of drag similar to mine. I just connect with the way he realistically lives in his character. He makes strong choices for the character and just commits to it. Also, it’s inspiring that he uses drag to kind of mend and grow a lot.

Though I also love Carmen [Carrera] because she does something completely different.

What draws you to Carmen?  She’s great because I love her confidence and her body. I think sometimes the things that amaze us the most are the things we can’t do at all. Really fishy body queens amaze me because it’s something I can’t touch.

Is that a direction you would take Trixie?  Never, never, never. The whole concept of Trixie is that everything is fabricated right down to my eye color. I’ve always prided myself in the transformation—turning a normal-to below-average-looking dude into this ridiculously plastic-looking girl. I love using makeup to do all the same things that surgeons do.

My whole mission statement is to create this over-the-top thing of supreme beauty. I feel like cosmetic surgery would be cheating my mission and changing Brian. I don’t want Brian to be different.

She’s a great example of how much power you’re given in drag. In our society, to be a man is to have privilege and power, but for a man to willfully step outside of that and dress like a girl is super inspiring.

Well, we are certainly looking forward to seeing what you bring to the race. Any final thoughts to leave us with before the show starts?  I have a saying that carried me through college:

Start where you are.
Use what you have.
Do what you can.

In life all you can ever do is take what you have and do something with it. That’s what you do with drag and what I hope I’m able to inspire others to do too.