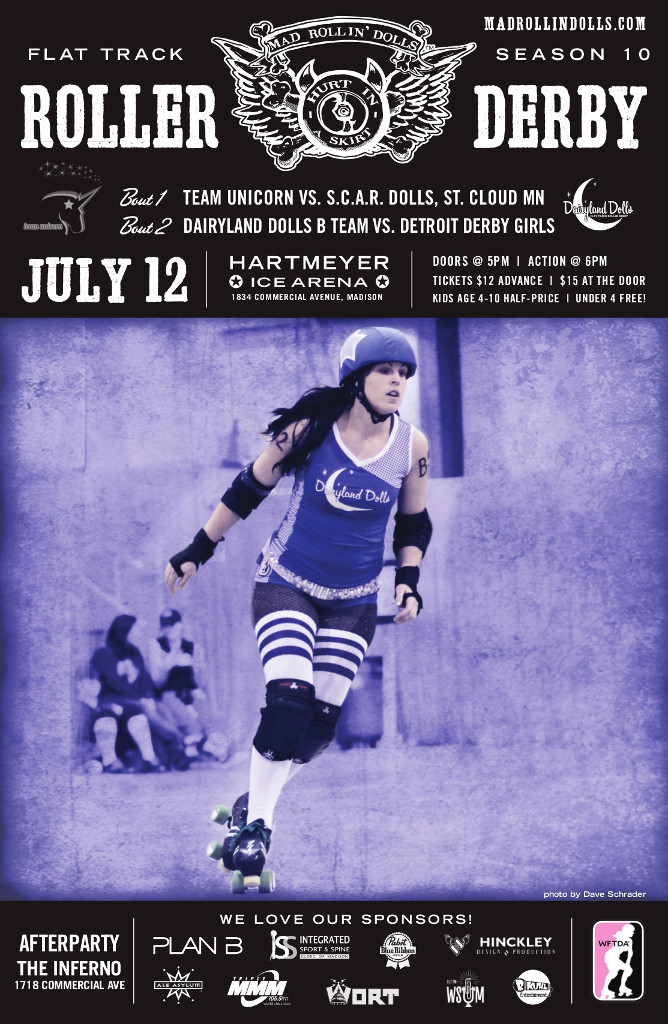 Mad Rollin’ Dolls roller derby’s Dairyland Dolls square off against Detroit’s Dis-assembly Line at Hartmeyer Ice Arena in Madison
Madison, Wis. – The Mad Rollin’ Dolls’ Dairyland Dolls B-Team and Team Unicorn take the track on Saturday, July 12 at the Hartmeyer Ice Arena (aka “The Barn”), 1834 Commercial Ave., Madison.
Tickets for the bout are $12 in advance or $15 at the door. Kids ages four through 10 are admitted at half price, and 3 and under are free. Doors open at 5 p.m., and the bouts start at 6 p.m.
It’s all about glitter, rainbows, and magical skating power as Team Unicorn kicks off the action with a game against the visiting SCAR Dolls from Saint Cloud, MN.The second bout of the night features the Dairyland Dolls B-Team taking on the Motor City Disassembly Line. The last time these two teams met was at Midwest Brewhaha in 2013, with the DDs taking a commanding win over the Detroit team, 349 to 169. They’ll be looking for a repeat of that result on July 12!
For information on purchasing tickets, a complete season schedule, and after-party locations, go to madrollindolls.com.
Facebook listing: https://www.facebook.com/events/1427273434226581/
The afterparty for this game is located just across the parking lot at the Inferno, 1718 Commercial Ave., and will feature the debut of the Lunar Lounge: https://www.facebook.com/events/1433544903593811/
+ Google Calendar+ iCal Export