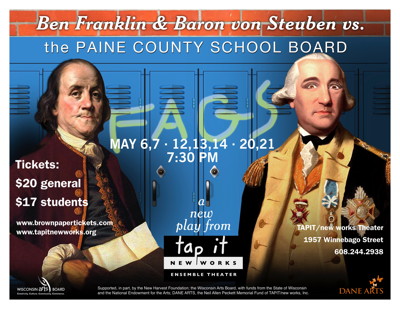 Individuals of all political persuasions invoke the “Founding Fathers” to justify their positions – but have you ever wondered what the Founding Fathers themselves would think?

That’s the question at the heart of Ben Franklin & Baron von Steuben vs. the Paine County School Board, the latest play from TAPIT/new works Ensemble Theater opening Friday,

May 6 and running through Saturday, May 21 at TAPIT/new works Theater, 1957 Winnebago Street on Madison’s east side.

The play is inspired by a little-known historical fact – Baron von Steuben, the Revolutionary War hero credited with transforming the Continental Army into a force capable of beating the British, was a gay man. When a history teacher in the fictitious Paine County School District teaches this, and conservative school board members get wind of it, the stage is set for dramatic confrontation.

All this proves a bit much for Franklin and von Steuben, who’ve been observing the action from the Great Beyond. They decide to risk intervening in contemporary affairs to set the record straight, successfully transforming controversy into comedy and demonstrating that even if history doesn’t repeat itself, it will still try almost anything to get your attention.