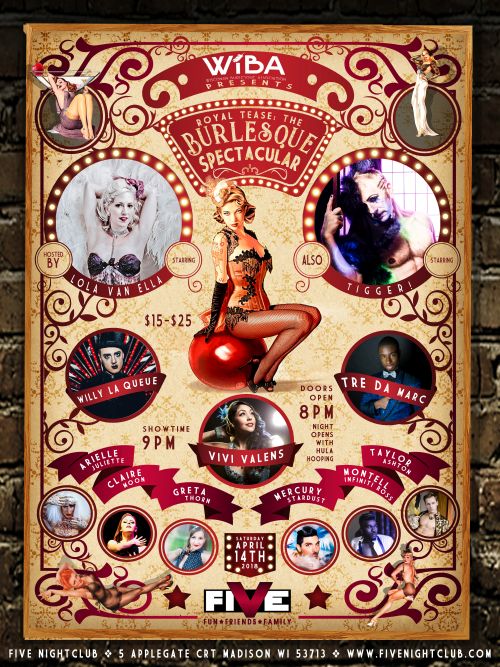 FIVE Nightclub welcomes the crown jewel of Wisconsin Burlesque Entertainment. Each installment blends nationally recognized performers with some of the best local acts from across the state. This April Royal Tease brings a performer that The New York Times proclaimed as “hysterical and acrobatic” and “wickedly arch” and Next Magazine described as “the Taboo-Defying Dynamo”. He is the “The Godfather of Neo-Boylesque”, its Tigger from New York City.

Guiding our audience through the evening as the hostess will be none other than a performer who has been on the “Top 50 Burlesque” list for a straight decade, Lola Van Ella from St. Louis.

Two of FIVE’s former title holders will be gracing the stage as well. The 1st alternate to National Entertainer of the Year, Taylor Ashton and Mr Courage MKE 2017, Montell Infiniti Ross.

Local performances will be from a group of Madison notables. Greta Thorn, a longtime member of the Peach Pie Caberlesque and now a Les Cougarss cast member. A chair dance unlike any other from the upcoming WI burlesque star, Claire Moon. The only male performer from Wisconsin ever to compete at the Burlesque Hall of Fame Weekender, he “The Ambassdor of Cheese and Tease” Mercury Stardust. The head instructor of Dance life Arielle Juilette and the Trojan Whores.

Tickets range from $15 to $25 in advance and $30 at the door. Doors will open at 8pm with hula hoop dancing from Jamie Johnston and Tazi before the start of the show. Come experience the majesty for yourself.

Putting Your Garden to Bed Walk

Napkin Block Printing with a Press