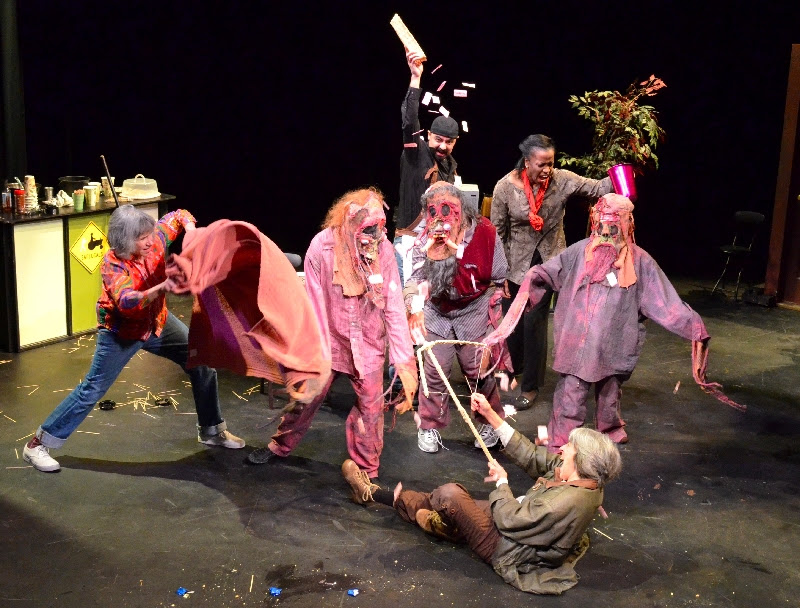 Even Fort Atkinson isn’t safe from the Zombie Apocalypse.

You know how it is with zombies – they keep coming back. The zombies featured in TAPIT/new works Ensemble Theater’s one-act comedy, Now What, are hitting the comeback trail — and the Cafe Carpe!

Performing Now What in a café, instead of a theater, is like releasing this action-packed comedy into its natural environment. That’s because Now What sets the Zombie Apocalypse in a coffee shop.

As a motley assortment of regulars, workers and strange passers-by struggle for survival, they gain new insights into themselves, the meaning of community and the surprising survival uses for stir sticks.

Taking full advantage of everything audience members think they know about zombies, this comedy lampoons society’s apocalyptic obsessions, and reminds us that even after you’ve gone over the edge, tomorrow is still the first day of the rest of your life.

Directed by Meghan Randolph and written by Danielle Dresden, Now What, is performed by Nedra Bobo, Francisco Torres, Donna Peckett and Dresden, with costumes by Rebecca Sites and appearances by guest zombies.

Since its premiere in November 2013, Now What and its original and undead cast have left a trail of tickled funny bones from Akron, Ohio to Madison, Wisconsin.

Contact the Café Carpe at info@cafecarpe.com or 920-563-9391 for reservations and more information. Contact TAPIT/new works Ensemble Theater at info@tapitnewworks.org or 608-244-2938 for more information about the Zombie Apocalypse Coffee Shop Tour.

Room to Heal Through Art

Inside Out – Rep Performances