A Song in His Heart 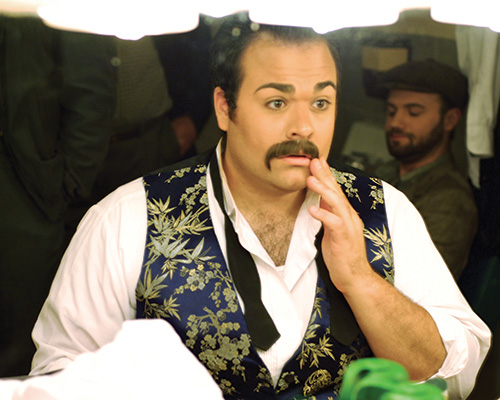 After weeks of preparation, you arrive at the theater. You meticulously go through your standard routine of putting on your costume and makeup. As you eagerly await your curtain call, your heartbeat starts to accelerate and you feel sweat forming on your palms. You go over your lines, blocking, and scenes one last time while you wait offstage—when, suddenly, you receive your cue. It’s showtime!

I’ve been involved in local music, theater, and opera since moving to Madison in 2003. Growing up, my family (my mother and older sister) moved around a bit. However, I consider myself from Montana, more specifically, the small town of Deer Lodge, Montana.

I have been singing for as long as I can remember. As a kid, I dreamed of being a famous singer, even though I had a music teacher tell me I should stop singing, I wasn’t talented, and I would never make it. I was so crushed. I stopped and turned to musical instruments. I knew that the love I had for music wouldn’t stop, and I needed an outlet.

My family moved to Deer Lodge in 1992, and there I found chances that I hadn’t been afforded before. One such opportunity was a traveling company called The Missoula Children’s Theatre. MCT would hire actors/directors to travel the nation, going to various schools and putting together an entire musical in a week. This is where I encountered my first musical theater acting experience. After one show, I knew I was hooked.

For the next few years, musicals would be the only place you could hear me sing, as the fear of failure was too great. It wasn’t until my sophomore year in high school that I would sing in an organized chorus. I loved it. I took to the challenge and wanted to prove to myself and everyone else that I would succeed. Whether it was coming in early or staying hours after school, I worked hard to try to become the best singer I could be. I earned accolades through Solo Ensemble, All-State Chorus, and All-Northwest Choruses, most of which had never before been accomplished at my high school.

After graduating, I took a year off to work before going to college. During this time I was able to reconnect with my father, stepmother, and little sister who lived in Waukesha. I knew that Montana wasn’t a place for me to find success or be myself. Wisconsin seemed like it could be the fresh start I needed. So when my father offered to have me move in with him and go to school in the UW system, I couldn’t say no.

In an effort to meet new people and to better come to terms with my own sexuality, I started to volunteer at Project Q, a Milwaukee LGBTQ youth drop-in space. It was a space where youth between the ages of 12 and 24 could go to feel safe and be around other young adults within their community. It was an opportunity that I wish I’d had growing up. I felt the need to make myself available to them. It was through Project Q that I was able find my voice as a gay youth.

Unfortunately, I would need to take an absence from my schooling. The relationship between my father and stepmother had become strained, and I was unexpectedly homeless. This was not what I had planned for within six months of relocating. For about six weeks, my entire life took place inside of a two-door hatchback Ford Escort, and my sleeping arrangements involved jumping from couch to couch. It would have been very easy to turn around and drive right back to Montana. However, I knew Montana wasn’t right for me. I needed to buckle down and pull myself together.

I moved to Milwaukee. I was working as a server/bartender by day and performing as a musical theater actor by night. At times it seemed like thankless work, but I needed to work hard to live. Most importantly, the work helped me really define who I am as a person.

Upon moving to Madison in 2003, I started performing with Perfect Harmony Men’s Chorus, singing with the group for about four years. I started performing with local theater companies: Children’s Theater of Madison, Verona Area Community Theater, Middleton Players Theatre, StageQ, and Four Seasons Theatre, to name a few. I was given the opportunity to sing with Madison Opera for the 2008 season. Never having had a vocal coach, I wasn’t sure if I had the chops for it, but I was up for the challenge.

I am tremendously honored to have been cast in my first principal role in Madison Opera’s upcoming production of Sweeney Todd. It’s a piece that asks the question, “Is it truly an opera, or is it musical theater?” My character, Pirelli, provides a challenging balance of operatic vocal passages, acting, and singing—all during the scenes of dialogue. I’m very thankful to John DeMain, Kathryn Smith, and Madison Opera for this auspicious opportunity.

I hope you are able to experience the amazing music that Sweeney Todd presents, as well as the astounding talent from all who are involved. I bid you buongiorno and good day, and see you at the opera!

You can also catch Bobby this spring in the chorus for the Madison Opera production of The Barber of Seville, as well as in Opera in the Park. Later in the summer, he will be featured as Nicely Nicely Johnson with Four Seasons Theatre in Guys and Dolls.