After Shelly Sabourin’s son came out to her as transgender, she sought to educate herself and others and push for equality, using the New York City Marathon as a means to put her money where her mouth—and heart—is.

Life can certainly lead a person down several different paths. Often it’s not a path one would expect. Rewind nearly three years ago to when my son Ronan came out to me as transgender. I wasn’t at all surprised. In fact, I was happy and relieved that he could finally feel comfortable being who he was born to be.

My son talked to me about the steps he had taken to move forward as Ronan. Of course, being his mom, I became worried for his physical, emotional, and mental health. As his mom and a nurse, I wanted to learn as much as I could to support him and get him anything he needed. I also wanted to have the knowledge to guide his siblings and others through the transition, as I recognized it wasn’t something that was just affecting Ronan. I also knew the horrific statistics about suicide rates and depression among the LGBTQ community, particularly transgender individuals, and I was determined to prevent my child from becoming a statistic.

I found many amazing resources through online searches. I joined a parent group for those with transgender children. I was lucky to find an amazing class offered at Madison College, taught by Jamie Steckelberg, called “Gay and Lesbian Literature.” It was through this course that I gained so much more knowledge about perceptions and societal issues that my son and others have faced. Jamie pushed me to really pursue and research ways I could make a difference in my own community. She gave me resources beyond the course in order to enrich my knowledge of understanding the LGBTQ community. I knew that I needed to do more to help my son and others.

One of the things that my son and I have always enjoyed together is outdoor activities. I participate in triathlons and running competitions and had seen several friends who had gotten involved with charities through such activities, and wondered if there was anything of this kind that I could pursue to help the LGBTQ community and give a voice to my son.

I started researching and came across the Athletes for Equality team through the Human Rights Campaign. I was intrigued. I saw the list of races that their athletes had participated in over the past few years. The New York City Marathon caught my eye. I thought it might be a long shot, but I applied for their team to run in honor of my son, told my story, and in early March of this year I received a phone call from Nicole at HRC. She offered me a spot on the HRC team.

I knew this would be a challenge for me in a couple of different ways: Running is not an easy thing for me and I also knew that raising money for LGBTQ rights may prove to be difficult as well, given the current climate in our nation. I was up for the challenge, though. I knew that what my son and others go through on a daily basis is hard and that I needed to do something to be a voice and change hearts of those who don’t fully understand LGBTQ issues. 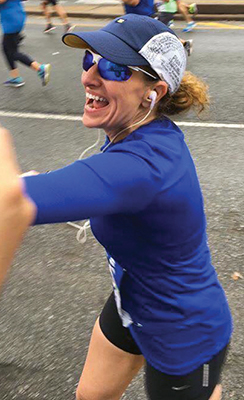 I used every gift I have been given to raise funds for the race. I came up with some of my best fundraising ideas during training runs. I’m not afraid, and have taught my kids to never be afraid. I decided that I should try and reach out to some local businesses in the Madison community, so I called Plan B. The gentleman who answered the phone was so pleasant, and when I explained my story to him and asked if they would be willing to make a donation, he asked me to come meet with him and his team. They offered to hold an employee turnabout drag show to fundraise for my cause—someone who they had never met! They pulled off an amazing show and presented a check to me for $500.

My son’s employer donated another $500. I had a friend and business owner hold a charcoal drawing night that raised $400. I managed to pull in over 135 donations totaling $8,025 for the Human Rights Campaign Foundation and became the top fundraiser for the team. All told, we raised nearly $29,000 to become the all-time highest fundraising team for Athletes for Equality.

This was not an easy task, and I put all the heart and soul I have into this in order to raise awareness and give a voice to those I love. I’ve received an amazing—and many times surprising—outpouring of support, emails, messages, and heartfelt conversations around my experiences with Ronan coming out as transgender and now my daughter, Bethany, coming out as bisexual.

Perhaps the most rewarding element, though, was running the marathon on November 5. While it wasn’t my fastest race, it was a race about equality for my kids, my friends, my employees, and all those I know who have a daily struggle with their identity. I know I have made an impact, and it’s all because of a little baby, Ronan, born to me 20 years ago. I’m lucky enough to have been given the opportunity to be his mom. One person can truly make a difference if they believe in their abilities and use their voice to promote change in attitudes.

Shelly Sabourin resides in Baraboo and works in Madison as Director of Nursing at a skilled nursing facility. She is an alumnus of both Madison College the U.W. In her spare time she participates in triathlon competitions ranging from sprints to Ironman.

Tags:
HRC New York marathon running Shelly Sabourin transgender
permalink https://ourlivesmadison.com/article/going-the-distance/ After Shelly Sabourin’s son came out to her as transgender, she sought to educate herself and others and push for equality, using the New York City Marathon as a means to put her money where her mouth—and heart—is. Life in the Middle Publishing, LLC 2018

Putting Your Garden to Bed Walk

Napkin Block Printing with a Press