Am I Welcome Here?
Mission Driven
The Power of Vulnerability
Breaking Binaries
Well Versed
All Together Now
Friendship is a Verb
Violence Hits Home
Unapologetic Craft
Family on Wheels
I Am UndocuQueer

U.W. Ph.D. candidate Laura P. Minero draws strength and inspiration for her work from her own experiences as an undocumented, queer Latinx—and from the parents who worked so hard to give her opportunity.

I often recall the sights, sounds, and smells of Guadalajara, Jalisco, Mexico. Yet the place I once called home is now the one place I haven’t been able to return to since my departure 21 years ago.

I remember attending my dad’s soccer games every Sunday, and my mother walking me to pre-school as a young child. We lived in one household with two other families; my single mother aunts who had their own daughters. Being an only child, my cousins were like my siblings. My parents, along with most of my extended family, struggled economically. My mom was only able to complete a sixth grade education and my father never received his high school diploma because he missed his last day of school.

They share stories with me about how difficult it was for them to acquire something many of us take for granted in the United States: notebooks and pencils. My dad recalls making his own notebooks for their different classes by dividing loose pages into clasp folders. He said to me once, “We always found a way to make it work.” I share this to paint of picture of the economic barriers my parents endured growing up and that eventually fueled their desire to provide me with the opportunity for a better future.

The realization that Mexico had limited opportunities for us as a family lead my father to journey to the United States. He couldn’t apply for a visa because he wasn’t financially stable, so he crossed the southern border of the United States hopeful to be able to provide for his family. I still have memories of crying with my mom, talking to my dad on the phone late at night. I hold the pain of missing him that much in my heart to this day.

My dad had found a job and was living with my aunt for a couple of months before my mom and I also journeyed to the United States. At the age of five, on December 25 of 1995, my mom and I packed up our things and ventured to Tijuana. It was my first time on an airplane, and I still recall my mom asking someone for permission to see the ocean through someone else’s window seat. I was full of hope and excitement knowing that I would soon be reunited with my dad.

My mom and I met with strangers at the border and I was handed off to a family that would help me cross the border by pretending to be one of their own children. I climbed into a burgundy van that had a mattress in the back and said goodbye to my mom, who indicated she would see me when we reached my dad in the United States. I had to remember a false identity in case border agents asked us questions. From one moment to another, I became “Linda Hernandez.” I was scared that if I did not remember this false identity, I wouldn’t be able to be reunited my parents. Later on, I found out that my mom had been stowed underneath the passenger seat of a car and had had a much more treacherous journey than I did.

I arrived to the United States and reunited with my dad a few days before my mom joined us as well. I always ask people to think about why a parent would choose to leave everything they know and cross oceans and treacherous mountains for the unknown, the unpromised, and a country that in many ways wants nothing of you.

Living on the margins

The transition into the United States, having left all that my parents and I knew, was one filled with many trials and tribulations. We lived in my aunt’s home for a while as my parents became more settled into their own jobs. My father worked in dairies and my mother worked in the fields of Central California picking cotton, grapes, and almonds. I still remember her getting picked up at five in the morning and coming home with her hair, face, and clothes full of dust.

For years all the way until this very day, I have seen my parents work laborious jobs for long hours. My dad has often had day and two a.m. shifts with fixed days off and no paid leave, and my mother has worked 12-hour long days with multiple health complications but no access to health insurance. These were and continue to be my parent’s circumstances because they are undocumented. My parents are exhausted but, despite this, they don’t complain and are simply thankful to have an opportunity to work. Labor rights are not a thing they are familiar with, and in fact are afraid to pursue any information about because they fear losing their job and being reported to deportation officials.

Being witness to my parent’s pain and living in a state of “aguantar” (withstanding) because they feel they don’t have the same rights as U.S. citizens is one of the major sources of motivation for my advocacy and social justice work. I share their story because there are many misconceptions about them, including that they don’t pay taxes and that they take advantage of government programs. My parents have paid taxes since they began working, and they contribute to Social Security even though they have no access to it or any kind of retirement fund of their own. They’ve never had access to viable health insurance.

Growing up, I had faced my own struggles. I was teased for speaking Spanish, and later on for being queer. I recall eating lunches alone often and having things written on my locker for being different. I put my energy into school because I found refuge in the encouragement of my teachers, despite being misunderstood by my peers.

However, my own struggles growing up undocumented primarily manifested when I began applying for college. I had been tracked into honors and AP classes and was in the top 15% of my class, but even this did not make up for my lack of having a Social Security number. I was stopped on the very first page and initially I doubted whether undocumented students like myself were even able to attend college. I had to disclose to my high school counselors that I was undocumented and needed help submitting my college applications. Thankfully, I had two counselors that advocated for me by making phone calls and taking me on college trips to see what possibilities were out there for me.

I was admitted to top universities in California but, unfortunately, I could not afford to pay the tuition fees. In 2008, undocumented students in California did not have access to state financial aid or grants. To this day, I am not eligible to apply for FAFSA, another loophole to get through since colleges required that you fill it out if you’ve grown up in the United States.

I recall spending most of my junior year crying in my counselor’s office, desperately trying to find a pathway to pursue the future I had worked hard to achieve. Unfortunately, I was forced to let go of the four-year university dream—temporarily. I eventually found out that I could receive a full ride to a local community college thanks to my two-year involvement in the California Scholarship Federation program. 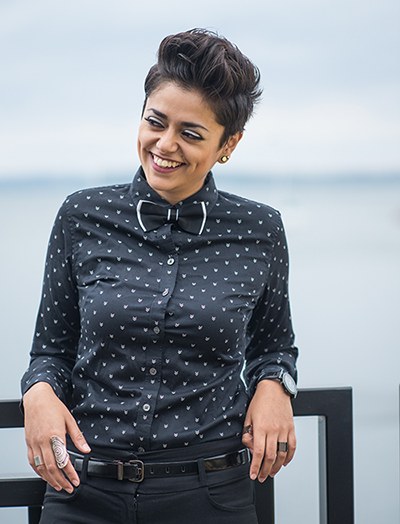 Fast-forward 10 years to today and I am now a fourth-year Ph.D. student in Counseling Psychology at University of Wisconsin-Madison. The Deferred Action Program for Early Childhood Arrivals (DACA) enacted by President Obama in 2012, which has presently been rescinded by Donald Trump, enabled me to work lawfully in the United States and finally be able to travel. This allowed for me to move out of California and acquire teaching assistantships to pay for my studies.

The ending of this program means that I will have to drop out of my Ph.D. program if a resolution is not approved by Congress. However, it is my own belief that passing a legislative solution to protect only us who have benefitted from DACA will only further perpetuate the good-versus-bad immigrant stereotype that has prevented us from passing humane, comprehensive, and inclusive reform that will protect families, children, and further prevent families from being unjustly separated.

My personal experiences propelled me to develop an expertise in examining how prejudicial, discriminatory attitudes and policy impacts the lived experiences of Latinx, Spanish-speaking, undocumented immigrant and LGBTQAI+ populations within the United States. As a social justice-oriented researcher, I believe that science can help us identify how to better serve our communities through more inclusive implementation and teaching of clinical practice, policy, distribution of services, and increasing equal access to education.

Although my work and own life experiences primarily focus on the intersectionality of undocumented immigration and LGBTQAI+ experiences, it is undeniable how the fight of other marginalized groups is one-in-the-same. More recently, we have been seeing the ways in which presently enacted policy by Trump and his administration are slowly cutting funding from the sciences and the arts, removing LGBTQ information from their websites, prevented transgender people from enlisting in the army, proposed the RAISE Act which would slash the levels of legal immigration to the country, threaten people’s lives by defunding affordable health care, and using immigrants as pawns against one another to propose militarization of the border.

We have also continued to witness the heart-wrenching and unfathomable killing of Black and Brown men at the hands of police, and continue to threaten water and security for our Native siblings. Despite this systemic oppression and marginalization, I am continuously inspired by my community, who rise in the face of racist, classist, sexist, homophobic, transphobic, and xenophobic policies and rhetoric every single day of our lives.

We need to recognize that our “privilege” is only an illusion, for no single human being is better than anyone else. It is not until we recognize the humanity and heart of every single person and stand shoulder to shoulder with them that we will be able to live in a just world. In order for us to move forward, love must be at the center of our social justice work: love for ourselves, love for the other, love for all that we are.

Tags:
Dreamers Immigration Latinx Laura Minero undocumented
permalink https://ourlivesmadison.com/article/i-am-undocuqueer/ U.W. Ph.D. candidate Laura P. Minero draws strength and inspiration for her work from her own experiences as an undocumented, queer Latinx—and from the parents who worked so hard to give her opportunity. Life in the Middle Publishing, LLC 2018