Scott Evertz reflects on building a career within the Republican Party without hiding his identity as a gay man, working in the Bush Administration, and supporting Bernie Sanders.

“It’s harder to be openly Republican in the gay community than it is to be openly gay in the Republican community,” Scott Evertz quips while sitting in one of the more liberal cafés on Madison’s north side. With his colorful sleeve tattoos, he fits in here. So well, in fact, that it would be hard to know he was also the first openly gay appointee by a Republican President in history. President George W. Bush appointed him as the director of the Office of National AIDS Policy. His office ran the President’s Cabinet Task Force on HIV/AIDS and the President’s Advisory Council on HIV/AIDS.

For Evertz, though, his political affiliation isn’t an endorsement of the full party platform. He’s quick to acknowledge that in the 2016 presidential election he was surprised that in an online survey his views lined up closest with Bernie Sanders. “Because of his integrity,” Scott says, “he is personally my favorite candidate.”

“My dad and mom were kind of liberal; what would now be called Liberal Republicans,” Scott explains, “They would probably be called RINOs (Republican in Name Only).” His father worked on the minimum wage law in the Wage Hour division at the Department of Labor and also on the Davis-Bacon Act’s minimum wage laws. His mother, whom he thought was somewhat conservative, did not like Ronald Reagan. She didn’t like his hawkish nature, or all of his rhetoric.

When Reagan started rising around 1980, Scott enrolled at Marquette University. The Carter/Reagan election was his first time voting.

At Marquette, Scott decided to play with super conservative and Libertarian philosophies. At one point his father joked, “When you send your kid to a Jesuit university and he’s majoring in the Liberal Arts, he’s going to come home and challenge everything about you.”

But one day he came home and did just that. He argued with his dad that a colorblind society didn’t need the Davis-Bacon Act. His father defended it, “Because no one would hire a minority contractor.” He then questioned Scott, “Do you think we should not be awarding contracts to minority businesses?” It was a teachable moment for him, and helped Scott see the harm in labeling our society as colorblind. 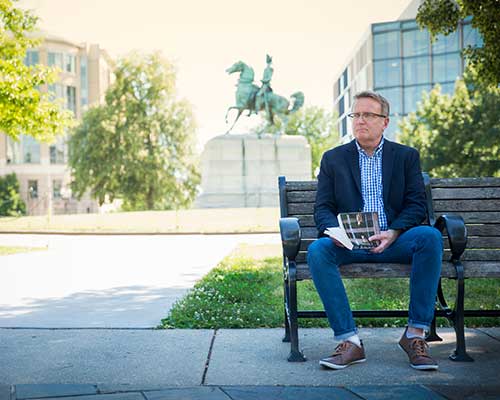 “You Got to Pick a Side”

Even with his often-liberal leanings, the deciding political factor for choosing the GOP was that he was squarely pro-life. According to Scott, “The bottom line became that the Democratic Party needed the pro-choicers and the Republican Party needed the anti-choicers, or pro-life.” It was the first time he witnessed the, “You got to pick a side” culture of American politics. For Scott, who at the time was involved with Marquette Students for Life, his affiliation became clear. “I was not going to be able to work on an issue that I was concerned about if I was working to elect Democratic candidates.”

Over time, though, his party affiliation has been emboldened by his value as a change agent. “What do I bring to the Democratic party?  I’m yet one more gay person in your party. I can’t contribute, in my view, the way I can on the Republican side,” he says.

“When we formed the Log Cabin Republicans, in the late ‘80s, early ‘90s, I was the chair of the east side Republicans in Milwaukee,” Scott explains. By this point, anti-gay sentiment was taking root in the party, and they were beginning to challenge Scott’s leadership because of his sexual orientation. He remembers being told, “You cannot be in the Log Cabin organization and continue to represent the official party.” Their reason was that, “We have debates over those issues. How can you possibly represent this organization and do that?”

Scott confronted them. “I’m the vice president of the board of Wisconsin Right to Life. That’s another issue that is debated inside this party.” He continues, “You had no problem with me being on that board. So what are we talking about here? Because you’re not talking about issues. You’re talking about the gay thing because it makes you uncomfortable, while the pro-life thing doesn’t?” In moments like these, he wishes he would have been as out in the political and business world as he was in college.

A Pivotal Meeting in Milwaukee

“I remember the exact address where I met him,” Scott says of his first encounter with Governor Tommy Thompson. At the time Assemblyman Thompson was just a rising name in the state party, with eyes on the Governor’s office. “It was Warren O’Connor’s home,” he says. O’Connor was a wealthy gay man known for the lavish parties he held at his Lake Drive home in Milwaukee. The occasion that caused Scott and Thompson to meet was a young Republicans event. The group called themselves the Pachyderms. Scott recalls what was so memorable about the meeting, “He was standing at the door of this house as people were leaving. He’s just like, ‘Do you have a business card? Do you have a business card?’ He was collecting business cards. He doesn’t have staff but he knows that he needs to get the names of the people at this thing. To me, that’s impressive.”

A week or two later, Thompson walked into Wisconsin Right to Life, where Scott was working as their first development director. From the door, he said, “There he is.” He remembered Scott from the event at O’Connor’s house. That began a very long relationship.

In 1994, Evertz became the first openly gay Republican to seek election to the Wisconsin Assembly when he ran against popular Democrat and Assistant Majority Leader Barbara Notestein. Because he was running on the East Side of Milwaukee, he knew he had an uphill battle. With the Republican base vote only comprising 19% in his district, he was free to run his campaign however he wanted.

“It is the most fun thing when you know you’re not going to win, because then you can do anything,” he says. “You can do whatever you want and you don’t have to be concerned.” He even told the Milwaukee Journal Sentinel, that year, “I couldn’t run as not openly gay. It’s not part of any political strategy. It’s who I am.”

Although it was not without controversy, when President George W. Bush took office, one of the first appointments he made was to name Scott the director of the Office of National AIDS Policy. His name was on the shortlist thanks to his past work with Governor Thompson, who had also been called to serve as Health and Human Services Secretary.

Of course, social conservatives worked overtime to kill the nomination. They attacked Scott for his work with the Black church in an effort to stop labeling homosexuality as a sin. Unwilling to see the link between stigma of homosexuality, and the disproportionate infection rates among African-American men who have sex with men, they argued that this was part of Scott’s “homosexual agenda.” The Family Research Council even hosted a session aimed at forcing his resignation.

However, it took Scott less than a year to establish himself, and to be viewed favorably. Much of that is owed to his skill at achieving bipartisan consensus around his work—made easier by an issue that already had a history of bipartisan support dating back to President Clinton. A few of Scott’s proudest moments continue to be from the times when he was standing in the Rose Garden alongside President Bush and members of his cabinet as they announced initiatives like the Global Fund to Fight AIDS, Tuberculosis and Malaria; or the bilateral program which is PEPFAR, the President’s Emergency Program for AIDS Relief.

There’s pride in his voice when you listen to him talk about sitting in the Oval Office across from the President of the United States as they’re concluding to do something major on AIDS. His later departure from the role came from his support of needle exchange for injection drug users and condom use for gay and bisexual men, both to prevent the spread of the disease. The Bush administration staunchly preferred sex education programs that advocate abstinence only.

Today Scott continues to work in the same space as he was in the administration. He continues to influence both global and domestic policy on public health issues—namely HIV-AIDS—in both D.C. and Wisconsin. As HIV is increasingly becoming a disease of poverty, he’s been able to advocate on behalf of organizations like the AIDS Resource Center of Wisconsin (ARCW). He explains how now, “You’re likely to have someone walk in the doors of ARCW with a whole host of issues from social services to mental health to other health and dental issues.”

Just last month he was at the United Nations in New York for an HIV-AIDS meeting, which had leaders from all over the world participating. For him, it was a moment to reminisce. “I led the first U.S. delegation to the preparatory conference which drafted the first UN declaration on HIV-AIDS back in 2001,” he says.

Fast forward to 2016, and there are frequent meetings at the UN on this topic. He’s happy to be back there representing a non-governmental organization and able to do a lot of the same work in his current role as a lobbyist.

Tags:
Scott Evertz
permalink https://ourlivesmadison.com/article/inside-man/ Scott Evertz reflects on building a career within the Republican Party without hiding his identity as a gay man, working in the Bush Administration, and supporting Bernie Sanders. Life in the Middle Publishing, LLC 2016