U.W. Rowing coach Lowell McNicholas built a career, and a strong sense of self, by being out on the water.

When Our Lives approached me and asked if I wanted to contribute something to the publication, I jumped at the chance. But when I sat down to answer the prompt, “How has coming out or being a member of the LGBTQ community impacted your athletic life?” I had difficulty coming up with a concrete narrative. After several days racking my brain for a thoughtful story I could share, I realized why I was struggling.

The history of homophobia on sports teams, and the fact we have been conditioned to view coming out as a huge, life-altering event that will completely define who we are, meant that I was looking for a dark coming-of-age story, on how I was able to “rise to the occasion” in spite of the odds—or something along those lines. I was viewing the prompt through a negative lens, adding negative connotations to the word “impacted.”

I needed to reframe, because the reality is I don’t have one of those stories. I feel very lucky to be able to say that. It would be naïve to think that my positive experience is universal for all athletes across the country. Many sports teams are still dealing with homophobia, racism, and bigotry on a daily basis. I have tremendous respect for the individuals who, in spite of the intolerance or hate around them, have the courage and strength to share who they are.

Partially because of the progressive, inclusive, and loving community of friends, family, and teammates I grew up with, but also because of my involvement in athletics (rowing in particular), I had to rise to the occasion in different areas of my life. A quote from author and athlete Dr. George Sheehan about running (which also applies to sports like rowing and swimming as well) has always stood out for me:

Part of the reason why coming out wasn’t a huge event for me was because it wasn’t the center of my identity. It is an important piece for sure, and one to be proud of, but I was first and foremost more worried about proving myself in the athletic arena. That was what defined who I was. 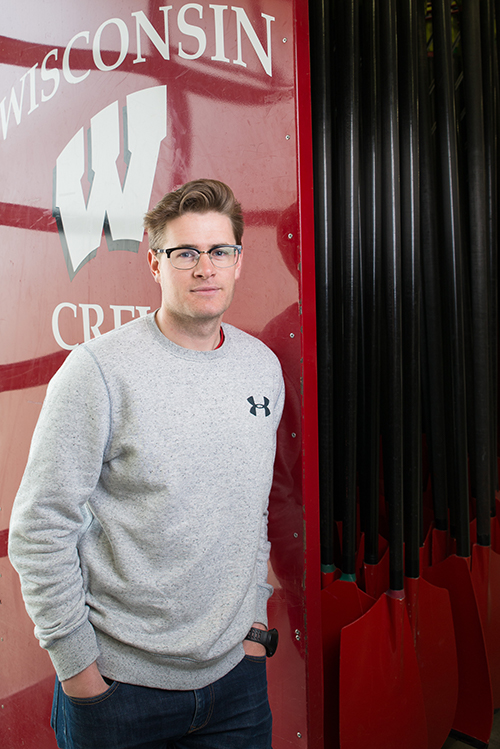 I didn’t fear being stereotyped—as many in the LGBTQ community are—because rowing gave me the opportunity to prove to myself who I was. It demanded it; especially Wisconsin Rowing. As one of the only competitive teams in the country the doesn’t rely on international recruits (who oftentimes have several more years of experience, which can include World Championship or Olympic races), Badger oarsman must step into a leadership role, push outside their comfort zones, and be fiercer than any of our competitors in order to be successful. Because of that experience, I can testify to my work ethic, my commitment to my team, my stubbornness, my resiliency, and my willingness to give blood until the last stroke of the race.

Athletics is a great equalizer. No matter what sport you are considering, it doesn’t matter your race, ethnicity, age, socioeconomic status, religion, education, politics, sexual orientation, or where you came from. The only thing that matters is whether can you compete. The best coaches and teams want to work with the most dedicated, enthusiastic, relentless, gritty, tough, and physically fit people. As my former coach (and now current boss) has said many times: “If you can pull on an oar, who cares about the rest?”

Diversity of backgrounds, thought, and character strengthen teams. Just as my four years rowing as a Badger or two years working at the State Capitol gave me tools to be a better coach and professional, who I am is also an asset.

I believe that my involvement in athletics gave me the ability to reframe the prompt to ask not how being part of the LGBTQ community impacted my athletic career, but rather the opposite: How did being an athlete and working in athletics impact who I was? Not only did it help shape who I am today, but gave me the confidence to be that person, softened the “impact” of how hard coming out could be, and opened doors for me. Being an out athlete and coach means I have more to bring to the table.

Interests:
Gay In the Community Sports